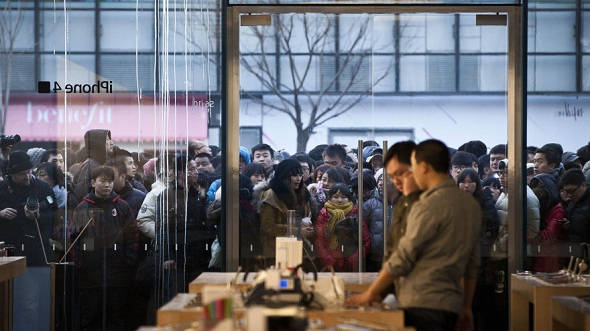 Inside an Apple Store in China

The ban applies to all Chinese central and local government agencies, which are not allowed to use public money to purchase these products.

All in all, the government has omitted ten of Apple’s products such as the iPad, iPad Mini, MacBook Air and MacBook Pro devices from an official procurement list distributed last month. The latest move comes amid growing tensions between Beijing and Washington over hacking and cyberspying claims.

Since years, American politicians have warned government contractors against purchasing equipment made by the telecommunications firms, Huawei and ZTE on account of their close ties to the Chinese government. Though the Washington’s intelligence committee did not have firm evidence of wrongdoing, it banned them from doing business in the US.

Following revelations by Edward Snowden of widespread U.S. government spying, China has increasingly sought to limit the use of U.S. technology. In May, China banned government computers from using Microsoft Corp.’s Windows 8 operating system. Again citing security concerns, antivirus products from foreign vendors like Symantec and Kapersky Lab have also been excluded from procurement lists in favour of Chinese antivirus vendors. These two anti-virus vendors had previously sold software to Chinese agencies. And more recently Chinese officials raided Microsoft’s offices as part of an investigation into allegations of market domination and abuse.

The move could prove a major setback to Apple as China is an increasingly important market. Greater China (China, Taiwan and Hong Kong) contributed 16% of Apple’s revenues in its third quarter of fiscal ’14. The $5.9 billion revenue generated from Greater China highlighted an increase of 28% year-on-year (YoY). This marks Apple’s third largest market behind the America and Europe, contributing 16% of the company’s total revenue.

Tim Cook disclosed that business in China had exceeded Apple’s own expectations and that iPad sales had increased by over 51% while MacBook sales were up by almost 39% in the 3Q. Expanding the territory was also cited as one of Apple’s top most strategic priorities. The ban on government buying will diminish sales directly, but analysts cautioned that it will also have a ripple effect on sales to consumers and other businesses.

“When the government stops the procurement of products, it sends a signal to corporates and semi-government bodies,” said Mark Po at Hong Kong’s UOB Kay Hian. “The Chinese government wants to make sure that overseas companies shouldn’t have too much influence in China.”