This may be just the tip of the iceberg with more governments and company organizations getting together to stop these bullying tactics by tech Behemoths like Apple, Facebook and Amazon.

Apple may be racing toward a plus $2 trillion valuation mark, with investors saying it has more in its stable to race ahead, but there are many who are concerned about the monopolistic trend in business that is happening.

Amazon, Apple, Facebook, Microsoft and other industrial giants seem to be swallowing up the smaller players in the respective sectors and even making moves to extend their tentacles in vertical business spaces. So much so that governments are looking into antitrust and monopoly laws to curb these tendencies.

In consonance with this, Apple Inc.’s South Korea division has proposed measures to address the South Korea Fair Trade Commission’s antitrust concerns and offered to provide $84.02 million worth of support programs for small businesses, consumers and others. The Korea Fair Trade Commission had instigated an investigation against Apple Korea over allegations that it was using its dominant status to force mobile carriers to pay for advertising and warranty repairs. 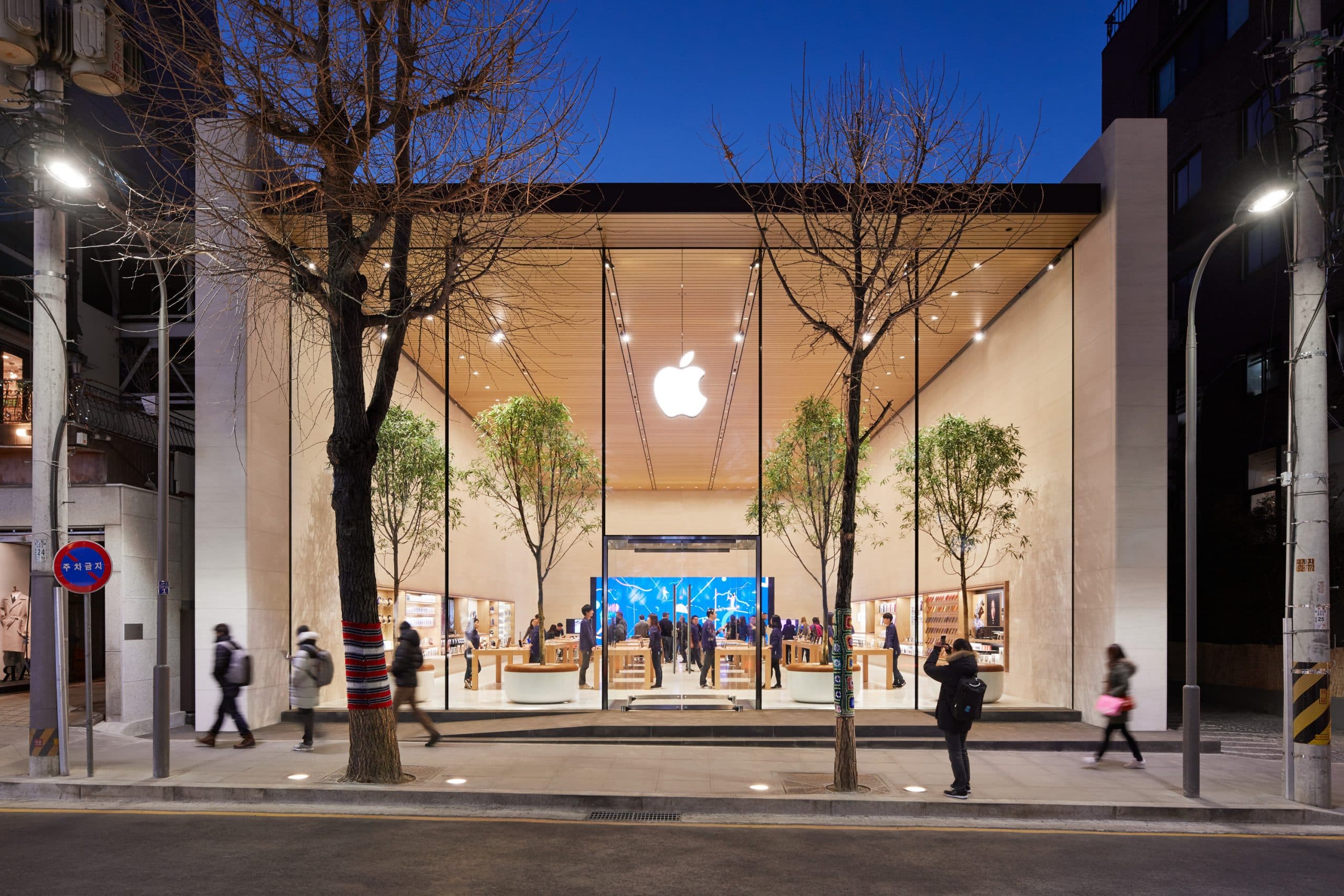 Located in the heart of the Gangnam area, Apple Garosugil’s 25-foot glass facade blurs the lines between the street and store.

There were three main points of contention that the KFTC has sought to address.

Apple forced the carriers to buy flagship models even though customers looked for budget models and if a phone was faulty Apple would make the carrier bear some of the cost of repair and replacement.

Carriers paid in full for running iPhone ads on TV, but they were only allowed to use Apple’s own ads, and could add their own logo to the final frame. The KFTC argued this was unfair on competing smartphone companies, who did not have the same leverage. And also cost imposition was not legal. Out of the 100 billion won that Apple has pledged, 40 billion will go towards building a center to support research and development for Korea’s small manufacturers and 25 billion won to establish an “academy” to provide education to developers. Another 25 billion won will be used to give discounts to consumers on warranty repair.

Apple has 18 percent market share in Korea’s mobile phone market. Samsung here rules the roost with a 65 percent share, according to data from researcher Counterpoint.

Apple is facing some flak for its App Store policies and its business practices in Europe. The latest is its legal battle against Epic Games, the owner of highly popular Fortnite gaming app that has been booted out of the Apple App store for objecting to pay the 30 percent share of its in-app purchases to Apple.

This is a similar situation faced by the makers of Hey, an email app built by Basecamp (a project management tool company), who are being asked to pay 30 percent of their in-app purchase or find another platform to showcase their app.

David Heinemeier Hansson, the co-founder of Basecamp, said in a Twitter message. “That’s exactly what monopolists always say! Take it or leave it! Because they KNOW you can’t leave it.”

“They can get to essentially extract any cut they want. They’re under no market pressure to be competitive. This is Monopoly Squeezing 101. As I said in my testimony before Congress, why is it that credit card processing fees hover in the 1.8-2.8% range, while Apple’s App Store has sat steady at 30% on the high end? Because there’s no competition! And they have a monopoly grip! There’s zero impetus on Apple to lower prices, stop being abusive, or even enforce their own policies with any sense of consistency or justice.”