Apple iPhone 11 launch date is closer than you think

With the Apple iPhone 11 launch date upon its heels, it’s time to revisit everything we know about this year’s lineup. The handsets will go on sale on September 20, contributing to fiscal fourth-quarter sales. Here’s a roundup of all we know about the 2019 iPhone models.

An anonymous Twitter account named CoinX has suggested that at least one of the models will have “Pro” in its name, such as “iPhone 11 Pro” or “iPhone Pro.” Over the past year, CoinX has accurately leaked several details about upcoming Apple devices, including names of iPhone XS, iPhone XS Max, and iPhone XR.

“Pro” for iPhone? Crazy naming schemes over the past few years.

CoinX was also the first to reveal the removal of the headphone jack on 2018 iPhone Pro models.

According to a long list of leaks from a Foxconn employee, this year’s lineup won’t have “iPhone” branding on the rear of the devices.

Apple is also planning a “rainbow” version that would highlight the company’s logo and the rest of the case. The logo will have a lot more subtle shimmer than its rival Samsung Galaxy Note 10 series. 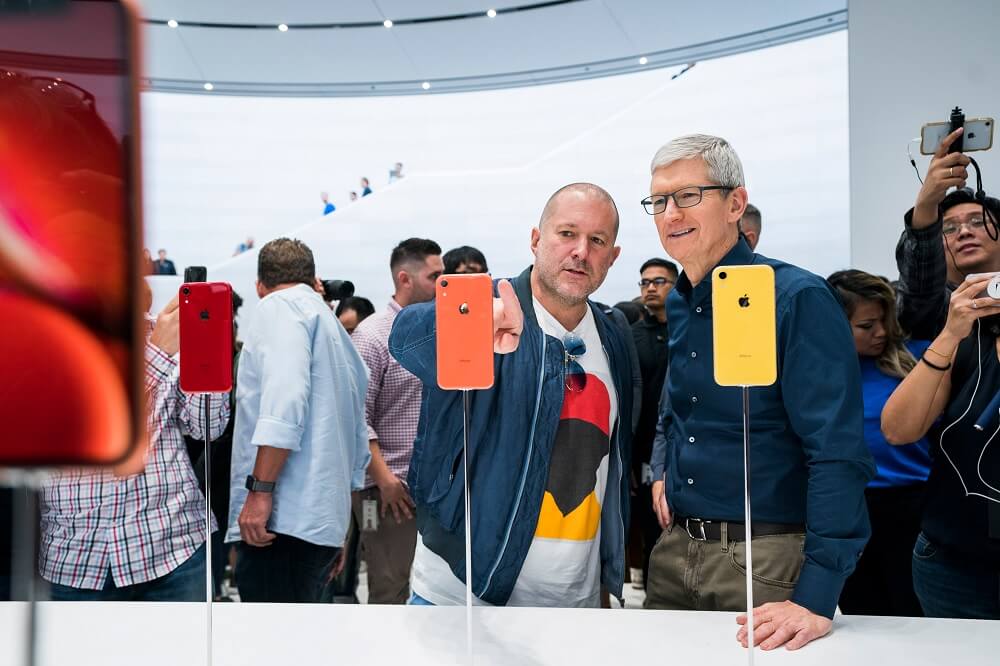 Jony Ive and Tim Cook at the September 2018 launch of iPhone XR.

According to a Chinese Q&A website, this year’s lineup will also be available in a dark green color with matte appearance.

iPhone 11 lineup is expected to include two higher-end 5.8-inch and 6.5-inch OLED models and one lower-end 6.1-inch LCD model. Other features include triple-lens rear cameras on the higher-end models, larger batteries, two-way charging of AirPods, and more.

We might also see a revamped front-facing TrueDepth camera system that uses new components. This year’s lineup is expected to be 12 megapixels, up from 7 megapixels in the 2018 models.

All iPhones will be powered by A13 chips from TSMC, Apple’s chip supplier.

As suggested in multiple rumors, the 2019 iPhone lineup will come with eliminated 3D Touch that will be replaced with a new Haptic Touch feature. We’re also expecting bigger batteries to accommodate the new camera technology.

Thanks to WiFi 6, we might experience faster WiFi and LTE speeds in all the new iPhone 2019 models. Each will feature a bilateral wireless charging feature that will wirelessly charge Apple devices that support wireless charging like the Apple AirPods.

This year’s lineup will arrive pre-installed with wallpapers described as “treat.” These wallpapers will work with both Light Mode and Dark Mode.

We know for sure that Apple’s next-gen iPhone models will be expensive. Our best guess is that the pricing will likely start around $999 and go up for additional storage or for the larger screen. We expect the storage capacities of 128GB, 256GB, and 512GB.

Anna Domanska
Anna Domanska is an Industry Leaders Magazine author possessing wide-range of knowledge for Business News. She is an avid reader and writer of Business and CEO Magazines and a rigorous follower of Business Leaders.
« Bayer deal could leapfrog Elanco to become industry leader
Amazon Rainforest Fires Will Impact the Global Ecosystem »
Leave a Comment
Close