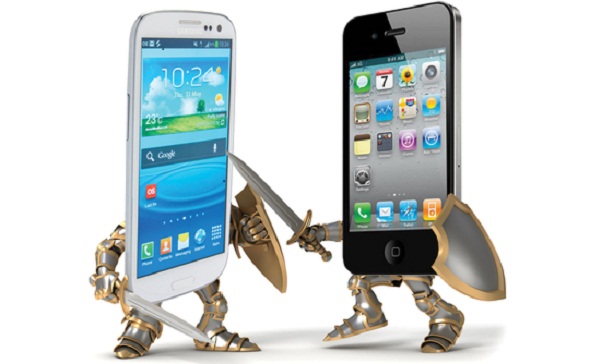 After a tough fight between smartphone titans, Apple Inc. and Samsung over patent infringement case, finally U.S court grants Apple partial victory over the Samsung patent case. Weeks ago, Apple was handed a mixed ruling by U.S appeals court, for the latest twirl in a blockbuster intellectual property battle with Samsung. It was reported by a source that as a prior infringement verdict that was upheld but a trademark finding, which the iPhone’s appearance could be protected, was unexpectedly removed.

This means that up to 40 per cent of $930 million verdict that has been won by Apple, was reconsidered for hearing in the U.S court. A long time awaited ruling from the origin of the global smartphones wars, the Federal court Circuit in Washington DC has upheld patent infringement violation – one that protects the shape and color of its iPhones as well as the damages awarded for re-imbursement for those violations.

On Monday, Apple stated in U.S court that this is a victory for design and those who supported Apple’s patent rules.

Along with Apple’s statements, Samsung honored the court ruling pertaining to patent infringement case, and stated that we have remained confident since from many years that our product developed by us does not breach Apple’s design patent and other intellectual property. The company made a verdict that they will never try to breach any patent laws and will protect their product from such violations.

Samsung, after making a fierce decision gained 2.6 per cent market share in Seoul trading by beating the wider market with 0.6 per cent gain.

It was noted earlier that at the time, when former Chief Executive Officer, Steve Jobs was alive and viewed as an emblematic of his tendency to fiercely defend for breaching intellectual property and copying other technologies. But, today the U.S court verdict was in Apple‘s favor by upholding the bulk awarded for its damage and re-enforcing the principle of design, for which the company was sued to advance.

Although, in 2012, the war between smartphone titans was widely seen as Samsung had violated some of Apple’s patent, including iPhone’s design and appearance.

Eventually, Apple was awarded with $930 million in damages, but failed to win a ban on the sale of infringing Samsung phones that are now no longer on the market. Since from the year 2012, both the tech giants had shocked their weapons, but in the recent case of Samsung, it denied paying a huge amount for the damage. Apple concluded that Samsung was trying to downplay its shameless copying of iPhones design and appearance. Thus, on Monday, Apple finally won partial battle over Samsung patent case.