The iPhone maker posted a quarterly revenue of $53.3 billion, 17 percent up from 2017 Q3 results. The figures easily surpassed Wall Street forecasts and fell at the higher end of Apple’s own projection made between $51.5 billion to $53.5 billion for the June quarter. The international sales contributed 60 percent to the overall third-quarter revenue.

“We’re thrilled to report Apple’s best June quarter ever, and our fourth consecutive quarter of double-digit revenue growth,” mentioned Tim Cook, Apple’s CEO during the third quarter earnings call yesterday. “Our Q3 results were driven by continued strong sales of iPhone, Services, and Wearables, and we are very excited about the products and services in our pipeline.”

Describing the previous quarter as “Apple’s best third quarter ever,” the company’s net income grew to $11.5 billion from $8.7 billion in 2017 Q3, which is a 32 percent escalation and a new June record too.

Apple also announced a quarterly cash dividend payment of $0.73 per share, due on August 16 to investors of record as of close business on August 13.

“We returned almost $25 billion to investors through our capital return program during the quarter, including $20 billion in share repurchases,” said Luca Maestri, Apple’s CFO.

Apple was trading 2.5 percent up at after-hours trading hours, even when the market was shaken up by Facebook’s and Twitter’s disappointing results.

iPhone sales revenue grew 20 percent Y-o-Y contributing $29.9 billion to the total income.  The company highlighted that the iPhone average sales price (ASP) raised to $724, from $606 in the year-ago quarter. The move was influenced by “strong performance” of iPhone X, iPhone 8 and iPhone 8 Plus globally. Apple sold 41.3 units of iPhone worldwide, a slight more from 2017 Q3 duration, but a major drop from the previous quarter where it posted 52,217 iPhone sales. With the introduction of iOS 12 this September, Apple is expecting a major boost in the iPhone sales segment.

Similar results were seen in iPad sales report, a flat growth with 11,553 unit sales when compared to last year’s third quarter. Though the product saw a 5 percent fall in revenue contribution too.

Besides this, Apple accounted major negative figures in Mac division. With mere 3,720 Mac units sold and $5.33 billion revenue earned in this year’s Q3, the product saw 13 percent and 5 percent dip in unit sales and revenue, respectively. However, the company said hints to turn the tables with the launch of MacOS Mojave later this year. 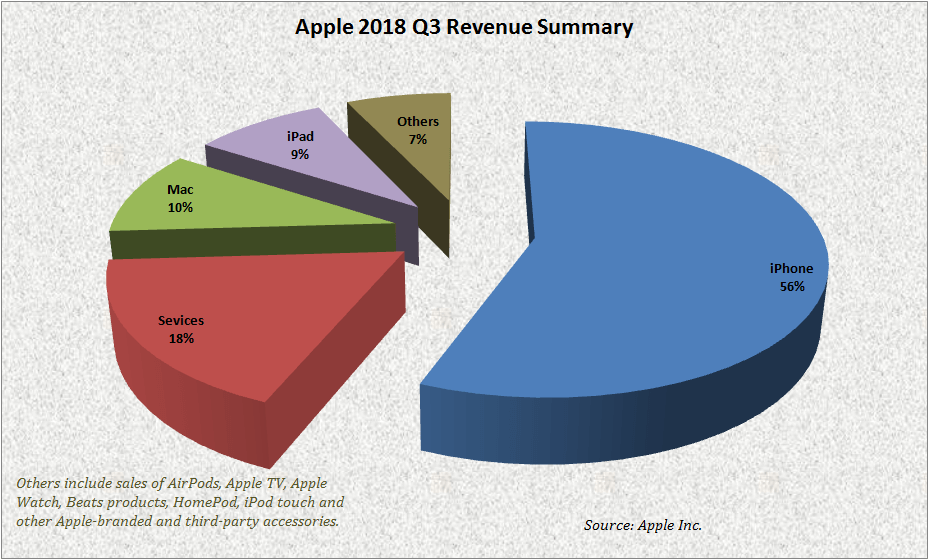 The Apple Music rose by over 50 percent against a year-ago quarterly result. Even AppleCare revenue jumped at its highest point in 18 quarters, thanks to Apple’s expanded distribution strategy. In addition, Apple Cloud services revenue soared above 50 percent in year-over-year comparison.

Notable, Apple Pay outperformed the bigger companies like Square and PayPal. The CEO said, “Apple Pay continues to expand with well over 1 billion transactions last quarter, triple the amount from just a year ago, with growth accelerating from the March quarter.”