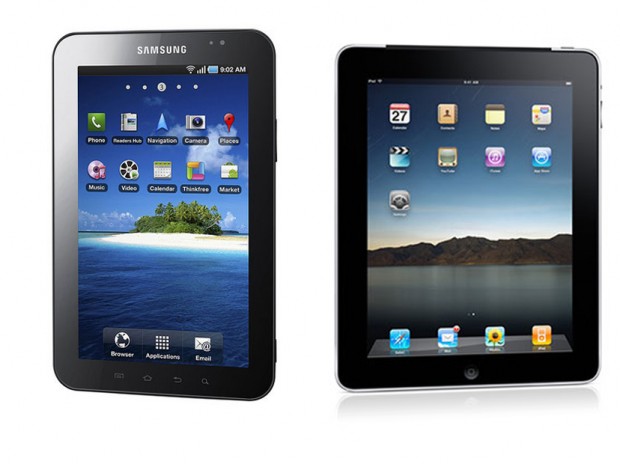 Not only the Galaxy Tab introduced by Samsung late last year, Apple is suing Samsung for allegedly copying their entire Galaxy range from Apple’s iPhone, iPod and iPad designs.

Extending intellectual property violation notices directed towards a number of Samsung’s mobile devices, including the Indulge, Captivate, Epic 4G, Nexus S and Galaxy S 4G smartphones in addition to the Galaxy Tab, Apple has demanded an injunction that would disallow continuation of Samsung’s alleged infringements.

In the lawsuit that was filed on Friday, Apple has said, “When a Samsung Galaxy phone is used in public, there can be little doubt that it would be viewed as an Apple product based upon the design alone.”

Additionally, Apple has asked to be compensated with actual and punitive damages, which would include “wrongfully obtained profits” by Samsung by way of these copied products, as well as funds towards correcting public notions regarding the allegedly confusing products through advertising.

With infringement claims at levels of product design, user interface as well as packaging of the Galaxy products, Apple said in its complaint that “Instead of pursuing independent product development, Samsung has chosen to slavishly copy Apple’s innovative technology, distinctive user interfaces, and elegant and distinctive product and packaging design, in violation of Apple’s valuable intellectual property rights.”

In particular, these alleged violations range from the rounded-at-corners rectangular case, the metallic edge and thick black bands as they appear along the top and bottom of the iPhone and iPod Touch devices to the manner in which Samsung’s devices – in particular, those belonging to the Galaxy range – present themselves and operate, such as the use of hand gestures on the screen as well as Apple’s “iconic” applications icons for the various functions the devices offer.

Apple also extends its infringement claims against Samsung to the packaging design of the named devices – such as the stark, minimalistic box designed for the Galaxy S.

Other alleged external design infringements include the slim buttons along the sides of the devices, while violations with regards to operational technology involve claims that Samsung has copied technologies patented by Apple for the interface offered by its devices.

The war over Smartphones

The latest in a series of lawsuits and counter-claims being filed in the world of smartphones, Apple’s infringement charges against Samsung follow its ongoing patent fight with Motorola.

On the other side of the game of this series of who-files-first lawsuits, Nokia pressed charges against Apple late March for infringing design patents.

Microsoft and HTC are also involved in similar cases of global smartphone leaders trying to establish their supremacy in the market.

GameStop is undergoing a complete revival under new CEO.
17 hours ago