Apple Bans Use of Two Harmful Chemicals from Assembly Plants 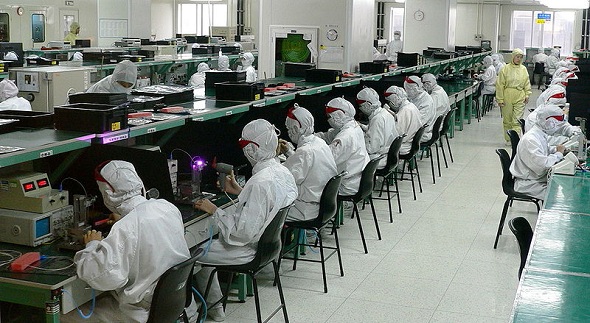 Apple has been facing criticism over its industrial facilities, after a string of worker suicides in 2010 by its supplier Foxconn Technology Group

Recently, Green American and China Labor Watch approached Apple Inc to remove the utilization of benzene and n-hexane from its hardware manufacturing process. Both the chemicals are known to be extremely poisonous, yet are still being used in Apple’s industrial facilities during assembly and a few other processes.

Benzene and n-hexane are found as common ingredients in paint strippers, glue and household cleaners.

Apple is now banning the use of these two harmful substances from its manufacturing process, after China Labor Watch and Green American demanded that the American tech giant replace it with safer substances.

According to an online report, Apple claimed to have investigated 22 of its final assembly facilities where atleast 500,000 workers are employed and found “no widespread use of benzene or n-hexane, and no evidence of worker health and safety being put at risk”.

Out of those 22 final assembly facilities, the two chemicals, however, we found at four facilities, but in quite low concentration that was in accordance with Apple’s safety regulations. After the investigation, Apple has a drawn out conclusion that safe alternatives to benzene and n-hexane exist hence should be used as cleaning agents. These changes will come into effect from September 2014.

Apple has also released a list of substances it directs at its suppliers.

In June 2014, Green America alongside many different groups sent a letter to Apple, requesting the organization to be more transparent in the chemicals utilized at its industrial facilities. The group also requested apple to create a trust to help treat plant workers, who’ve gotten to be sick or injured for making Apple items. Two prior months, both Green America and China Labor Watch organized a protest on the same issue outside an Apple store in New York.

Apple has been facing criticism over its industrial facilities, after a string of worker suicides in 2010 by its supplier Foxconn Technology Group. Apple has since worked hard to improve labor condition, yet according to some watchdog groups there’s more that needs to be done, including raising laborer’s pay and a better oversight over manufacturing plant conditions.

“The key is whether Apple can keep its promise,” said Li Qiang, executive director for China Labor Watch, in a Thursday email. “Currently, Apple’s auditing cannot fully uncover all the problems. Its effectiveness still has issues.”

In 2009, roughly 137 workers at an Apple supplier plant in China were exposed to n-hexane leading to some of them complaining over severing health conditions and thus, wanting Apple to help pay of their treatment.