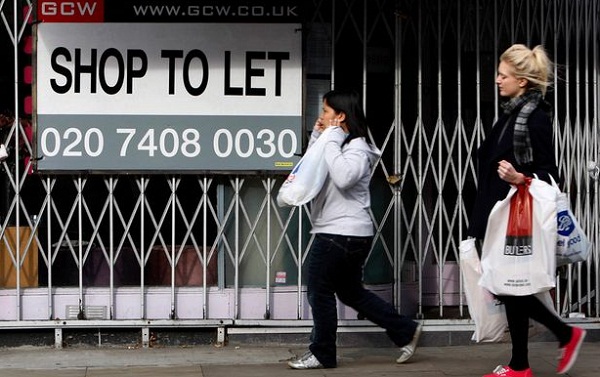 The annihilation of UK High Streets nears, according to the newest report. According to estimates, one in five stores in the UK would close by 2018, leaving more than 300,000 jobless. This alarming tendency, which has been already observed on High Streets, is driven by not only harsh economic conditions but also the growing popularity of online shopping.

The Centre for Retail Research issued its newest report, indicating that UK High Streets would be witnessing revolutionary changes as one in  five stores would close by 2018. The closure of more than 60,000 shops would not only cost many people their jobs, but it would undeniably transform the look of UK High Streets as well.

According to the findings of the report, the most affected will be Wales and the North West. High Streets in Wales will lose approximately 29 percent shops. As for the North West, the region is expected to see 28 percent of its shops shut down. The situation in the East Midlands will not look much better as about 27 percent of shops will close. The Centre for Retail Research indicated that London and the South East would be the most resistant to the alarming transformation of UK High Streets. The regions will witness a decline of 9 percent and 13 percent respectively.

It was underlined by the Centre for Retail Research that one of the least resilient to the ongoing trends would be chemists and beauty retailers as staggering 30 percent of these shops would shut down by 2018. The situation does not look better for music shops, book and stationery retailers as about 25 percent of them are expected to close.

What is interesting is the fact that big supermarkets would expand their operations as they will witness a 10 percent increase. In contrast, food retailers, including bakers, butchers, etc., will face real Armageddon as 60 percent of them will shut down the business.

As a result of these alarming changes, approximately 300,000 people are expected to lose their positions.

Furthermore, the Centre for Retail Research noted in its latest report that one of the reasons for the shocking trend was anemic growth in consumer spending which increased  around 12 percent since 2006 while operating costs climbed staggering 20 percent. Also online shopping, which has a 12.7 percent share in Britain’s retail spending, affects negatively UK High Streets. This share is expected to jump to more than 20 percent by 2018. As for Britain’s spending on High Streets, it dropped to around 40 percent these days from approximately 50 percent back in 2000.

The alarming changes have already been noted as retailers such as Comet and JJB Sports did not get off market challenges lightly, the fact is that they simply failed.  But that is not the last of the clear evidence of the ongoing changes as UK High Streets have witnessed the growing number of  cheap stores such as pounds shops.

Without a doubt, UK retailers have been suffering from the growing popularity of online shopping and if they want to survive, they have to adjust to the ongoing changes. Professor Joshua Bamfield, director of the Centre for Retail Research, underlined: “Retailers have to make clear and strategic responses to the changing pattern of how consumers shop, which includes tactical decisions about store numbers and locations,” adding that they should take steps aimed at integrating theyirall operations with online shopping to lure more clients and survive.

Undeniably, there is time for action if UK retailers do not want to share the fate of businesses which disappeared from High Streets. Thus they need plans as well as they have to be ready to close unprofitable units.

Anna Domanska
Anna Domanska is an Industry Leaders Magazine author possessing wide-range of knowledge for Business News. She is an avid reader and writer of Business and CEO Magazines and a rigorous follower of Business Leaders.
« Google’s Chairman Talks tough on UK’s tax laws
IMF pushes China to introduce essential reforms as it cuts growth outlook »
Leave a Comment
Close

Moderna Inc., the Boston-based biotech startup, reported its fourth quarter and 2020 fiscal year results, where it announced that it hoped t...
2 days ago

Hyundai Motor says the vehicle recalls are expected to cost the company about 1 trillion won or an estimated $900 million. In South Korea, 2...
2 days ago

Accor, Europe’s largest hotel chain, reported a $2.5 billion net loss in 2020 due to the deterioration in the industry linked to the sprea...
3 days ago

As the old adage goes, good things come to those who wait. This might come true for movie theatre operator AMC Entertainment Holdings Inc. w...
3 days ago