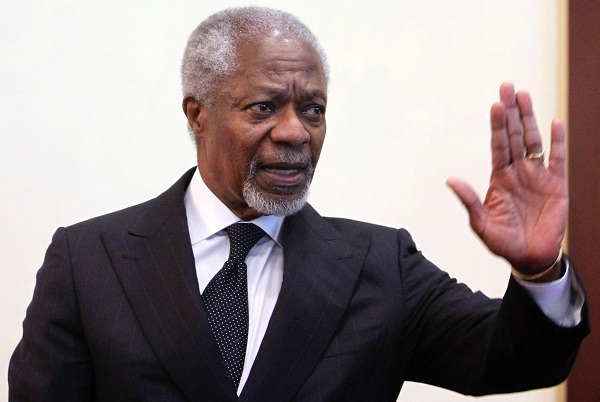 It seems that international companies and African politicians continue to take advantage of rich mineral resources of Africa, nothing has change. Thus findings of a team headed by former UN secretary general Kofi Annan should not be surprising as thee group claims that the Democratic Republic of Congo lost as much as $1.36 billion because of contracts signed in the 2010 – 2012 period. The staggering loss was mainly caused by iniquitous mining contracts signed by the Congo government and offshore companies, not to mention that prices of these mining assets were understated.

On the 10th of May, the Africa Progress Panel, a 10-person team headed by former UN secretary general Kofi Annan, issued its report on the situation in Congo.  The panel came to a conclusion that in the period between 2010 and 2012 Congo sold five mine concessions in cobalt and copper to foreign companies with non-transparent structures, yet this finding was not the worse. As Congo is one of the most mineral-rich African countries, the Congo authorities have been widely and harsh criticized for woolly and adiaphanous contracts they signed with offshore companies. Because of these non-transparent practices, the International Monetary Fund decided to not to continue with its loans for Congo.  Therefore it is not surprising at all that the Africa Progress Panel underlined in its report that the current situation in Congo reflected high costs driven by non-transparent concession sales and unfair practices.

Shockingly, the calculations of the Africa Progress Panel headed by Kofi Annan indicated that the country lost as much as $1.36 billion in potential revenues in the two-year period. However, it was highlighted in the report that no evidence of illegal practices of the authorities or the companies was found, yet the further investigation into the matter should be continued. In the report, which was released at the World Economic Forum for Africa, the panel highlighted: “[Congo’s] minerals sector has been plagued by a culture of secrecy, informal deals and allegations of corruption,” adding that the non-transparent contracts might serve as an ideal example of these practices and disquieting confidentiality.

In addition, the Africa Progress Panel also reasoned in its report that the reviewed five assets were sold for amusingly low sums. The estimates of the team headed by Kofi Annan indicated that Congo got rid of these rich assets for shockingly only one-sixth of their market values what might be an example of unfair practices and policies conducted by the authorities and offshore companies themselves, not to mention that these sums raised questions about the possible corruption. Interestingly, among companies involved in the purchases of the aforementioned five assets are giants such as Glencore and ENRC.

Furthermore, Kofi Annan has noted that the United Kingdom, which currently heads the G8, should use its position to expose and clarify all unfair and immoral practices used by mineral giants, including Glencore Xstrata.

What is interesting is the fact that the Extractive Industries Transparency Initiative (EITI) released its findings back in April, underlining that institutions in Congo had been unable to indicate where and whether the almost $90 million revenue payment from the mining segment was paid. It is not the first example of missing money as Congo indeed is said to be one of the most corrupted countries in the world.

The Africa Progress Panel headed by Kofi Annan is strongly convinced that the continent might benefit from its rich mineral resources and use it for improving lives of its people.  Even though many offshore companies such as Freeport-McMoRan, Glencore and Randgold, have their assets in Africa, it seems that African countries do not benefit from their operations. Therefore many accusations have been raised regarding corruption, poor transparency and even companies’ neo-imperialistic stance.

With no or small improvement in the situation of African nations, the Africa Progress Panel has called for international actions against omnipresent tax avoidance and implementation of measures aimed at reaching high level of transparency.