The American beer industry is one of the sectors that have surprised all within just a decade, growing employment rate by a factor of 10. Experts have attributed it to two factors, with one considered controversial.

Monopoly is a common factor across almost every economic sector. But the American beer industry is clearly one of the grave defaulters. Barely six years ago, two brewing companies: Anheuser-Busch and MillerCoors had enjoyed nearly 90% share of the beer industry. The market could even be credited worst before the 2000s, when government regulations allowed “tied houses” market chain. Thanks to the evolution of online marketing and other technology-driven developments.

Economists have only entertained trouble dealing with consolidation in the US beer industry. And research has found that innovation and workers welfare are both frustrated by the existence of behemoth competitors. Between 2002 and 2007, American breweries recorded a steep decline of employment, regardless of its expansion economically. But the last decade is completely a different story. The US breweries have expanded in six folds, with the employees also growing significantly to measure up the expansion. Brewery workers grew by 120% between 2008 and 2016. And the most surprising detail is: beer consumption in the US had experienced a decline as at the time of this remarkable economic growth.

Many data found that the average price of beer had grown by almost 50% as of 2017, while the employment figure grew about three times during the same period. This suggests that Americans are not drinking beer as much as they did in the 2000s. They are also paying extra money to have more superior beers. However, the best-selling beers in the US suffered from poor sales. Within the period of this economic expansion, the five major US breweries: Heineken, MillerCoors, Anheuser-Busch, Diageo, and Pabst experienced a 14% decline in the beer industry. But the microbreweries have a different result. In fact, the growth of craft breweries from 2016 to 2017 alone was 216%, according to the Brewers Association, with a median growth from about 284 barrels to 963 barrels within the year. And in one decade, employment grew by 70% within both groups of American breweries. 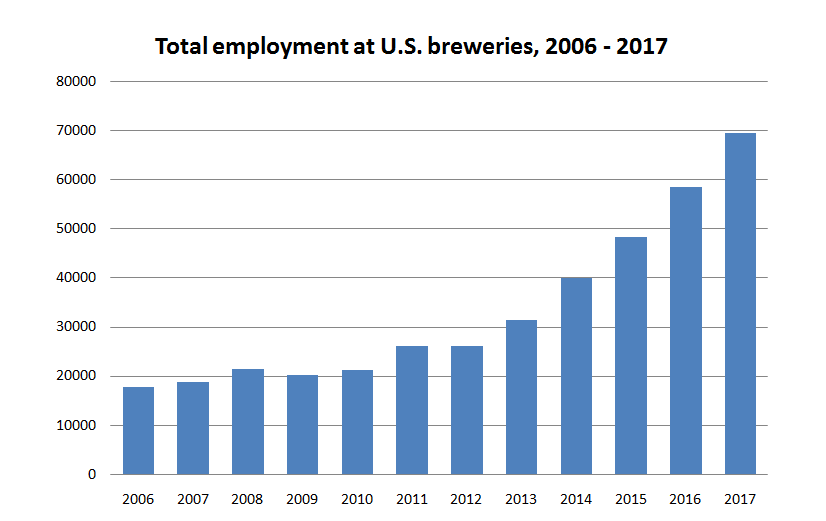 The employment statistics could be surprising. Technology and globalization are two factors that may oppose employment in our modern industries built to be more efficient with less manpower. Not to mention the ongoing consolidation that’s destroying entrepreneurship and innovation. But more breweries are coming up daily; about 997 new companies joined the beer industry in 2017, that’s approximately 2.7 new US breweries opening every day, while sales were shrinking for the most popular beer brands. And what is the source of these new establishments and jobs?

It’s the explosion of microbreweries across the country, also referred to as the craft-beer revolution. The trend is nationwide, even though the west is at the vanguard of a revolution in the American breweries. According to the Bureau of Labor Statistics (BLS), brewing jobs grew 10 times from 2006 to 2016, with the maximum growth recorded in 2015 and 2016. Both years had 12% employment growth rates. Between 2006 and 2016, brewing jobs in California and Colorado leading the employment volume moved from 3,022 to 8,113 jobs, and 3,497 to 5,173 jobs respectively.

But what led to the craft-beer boom within a decade? Information gathered from craft-beer experts and economists are pointing are two reasons: government policy and a more complex cause. On the more complex cause, the reason could be escalated to affect many factors, but in a more straightforward context, consumer tastes have contributed to craft-beer boom. Craft beer introduced a different energy that has been missing in the beer industry. They focused on tastes and health benefits which were ignored by the large breweries. The Brewers Association chief economist, Bart Watson said: “craft-beer movement was driven by consumer demand.” The trend is basically from the production of rare beer such as great variety and fuller flavor, which are missing in the beer industry.

Also, the craft-beer revolution took off when there’s widespread joblessness, during the Great Recession. The generation resorted to entrepreneurship, relying on opening small-scale businesses, including microbreweries to be employed. However, the success of craft beer is more about preference for sours and hops. 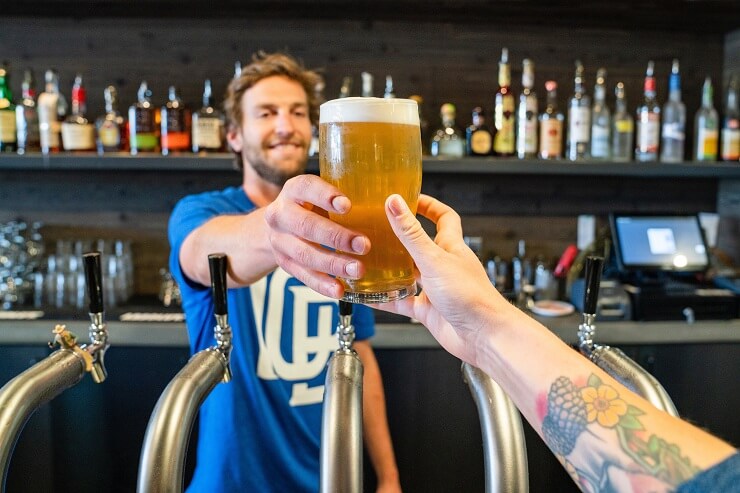 Secondly, the craft beer boom depicts how regulatory policies could encourage or suffocate innovation. Alcohol producers were the owners of many saloons and bars as of 20th century and this was regarded as “tied houses.” The American breweries and retailers were tied together, which led to monopoly and enabling breweries to push beer prices as low as they want. This encouraged prostitution, gambling and drunkenness in the American society until the tied houses became prohibited.

A vote against tied houses came after the 21st Amendment and retailers were separated from brewers. Three tiers from the tied houses were alcohol producers, independent distributors or wholesalers, and the retailers. After the division, it became difficult to monopolize the beer industry.

The sector is specifically designed to promote variety and enact laws that forbid alcohol producers from offering gifts to retailers in an attempt to lure their patronage. Brewers are also barred from buying shelf space in efforts to frustrate microbreweries from thriving at liquor stores and supermarkets. In its entirety, the market structure is designed to scrutinize the economic and political power of the giant alcohol producers while creating sufficient space for startups.

However, the self-distribution prohibition is slightly ambiguous. The tied house market chain does not apply to small craft breweries in some states; they are allowed to sell directly to consumers in taprooms. This implies that smaller breweries are allowed to take advantage of the three-tier system at the expense of the gargantuan companies. But beer fans and economists will always defend these laws due to its economic value considering that huge companies lack innovation and employment benefits.