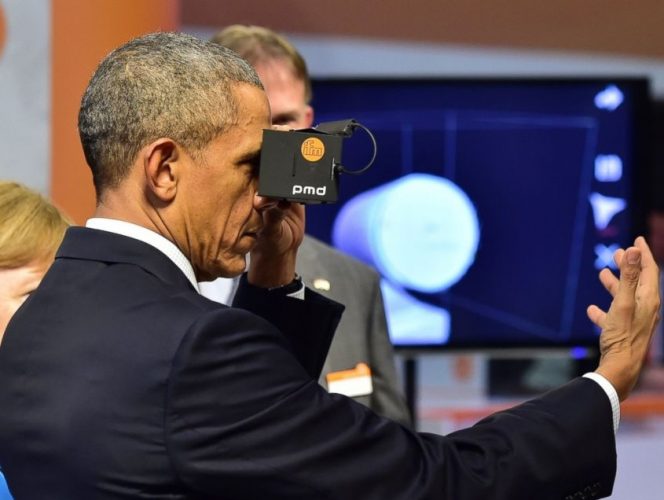 President Obama Experiencing VR at a trade show in Germany

Everyone around the corner has been talking about American President Barack Obama’s VR experience. The American Prez tried his hands for the first time on a virtual reality headset on Sunday while taking a tour of Hannover-based tradeshow of technology in Germany. Obama was accompanied by Angela Merkel, German Chancellor.

The Google Cardboard like PMD device when equipped with Samsung’s profit baby ‘Samsung Galaxy S7’, and a 3D camera served both reality alteration and digital immersion.

A certain way to ensure that economy remains on the highest peak is to make ensure that innovation keeps going on. And, America is famous for its never-ending innovation. From the Internet to Wright Brothers, and more recently Tesla’s Model T and Oculus Rift by Palmer Luckey, we’ve been able to strive as one of the most dynamic and innovative economies on this planet. Thanks to all those capable, intelligent, and hard working minds out there. 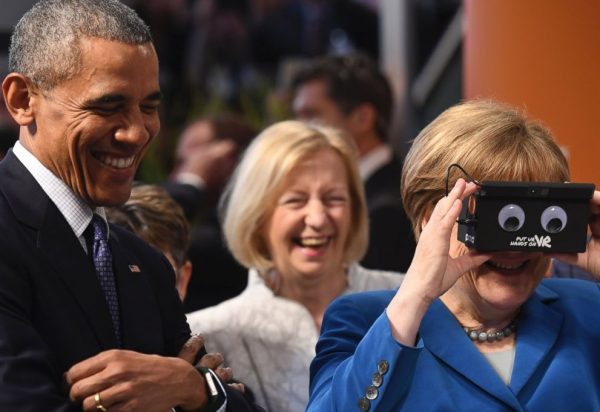 Obama loves to motivate such minds. Obama’s VR experience has been great according to him. It looked like he particularly enjoyed the virtual features of the VR goggles. He spent a considerably good amount of time while ogling his hand through VR camera. Furthermore, he experienced a program, which identifies separate fingers and assigns them with various color highlights. Perhaps, he enjoyed the experience of simulation so much that when German Chancellor tried on the device, he leveled it up into view by grabbing her hand.

“It’s a brave new world,” he exclaimed as he removed the headset from his face.

It comes out as a very surprising fact that now after very long time since VR devices have been doing rounds in the market that we’ve arrived in terms of Obama’s VR experience, which was reportedly for the first time. The American President has long heralded the investment and innovation in America’s technology as a key to reinvigorated economy. But, after 2 prototypes and moreover, the first commercial headset that just released in March, it’s shocking he hasn’t tried Zuckerberg’s Oculus Rift till now.