At Amazon Go, You Can Pick What You Want Without Ever Stopping to Pay

Amazon is planning to open as many as 3,000 of its cashierless stores, Amazon Go by 2021, as reported by Bloomberg. Amazon Go stores currently exist at three locations in Seattle and one in Chicago.

Engadget noted that the e-commerce giant already has plans to set up Go stores in New York and San Francisco. But according to sources known to Bloomberg, Amazon may open its cashierless stores at ten locations by this year-end with running for 50 locations in metro areas by the end of 2019.

The shares prices of Amazon and giant retailers including Walmart, Target, and Kroger sharply declined on Wednesday noon following the speculations.

Meanwhile, other than Amazon Go, the online giant has a physical presence in the market through a recent acquisition, Whole Foods Market, and 20 bookstores located across the USA.

Amazon Go stores are automated convenience stores with a tagline – “No queues, no check-outs, and no registration.” The shoppers only need to download Amazon Go app on their smartphones. Thereafter, they get direct entry into the store by scanning their phones at the turnstile.

After this, they can pick any food item like sandwiches, salads and drinks, and move out of the store without stopping at the cashier stop. The sensors and computer-vision technology installed on the food products and shelves detect what shoppers picked up and generate a bill for them automatically, removing check-out lines concept. 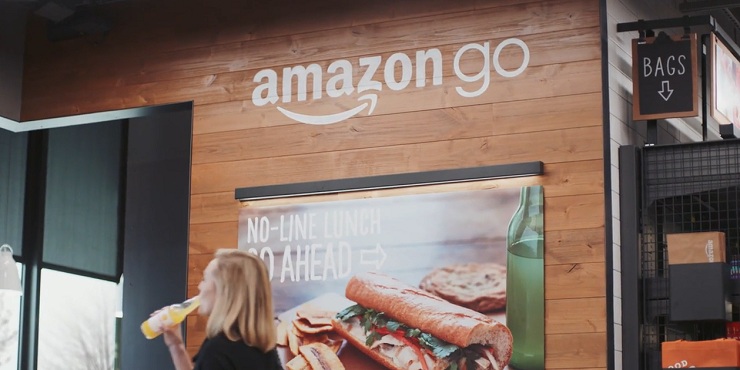 Amazon may open its cashierless stores at ten locations by this year-end. Source: Amazon Go

The first Amazon Go store was built in 2016, reportedly costing $1 million in hardware only. So, the major challenge for CEO Jeff Bezos to implement the expansion plan is the financial composition. However, he is known for taking risky financial decisions if he finds any opportunistic initiative, for example, Amazon Web Services.

For creating a balance at Amazon Go, Bezos has put a major focus on grab-and-go foods, freshly prepared bites and limited grocery products. This sort of setup requires less number of cameras and sensors, plus ready foods have higher margins than groceries.

To further diminish the cost influence, Amazon is considering to construct multiple cashierless stores in dense metro areas. In this way, the company could target people who are willing to pay a slightly higher price for fresh and quality food. Also, the proximity of stores would eventually help the company to manage them from one centralized kitchen facility. At least, in theory, this proposition looks quite profitable.

“Amazon Go already has no lines,” said Jeff Lenard, Vice President of NACS. “The key to success will be convenient locations.”

The good thing for Amazon right now is that there is no fierce competition when it comes to its cashierless store space. Though Standard Cognition opened a similar store, Standard Market in San Francisco earlier this month and Microsoft is creating an in-house checkout-free technology.

By spreading out Amazon Go stores in dense metro sites, Bloomberg concluded that the businesses of the fast food chains such as Subway, Prêt a Manger and Panera Bread, and conveniences store like 7-Eleven are seriously going to be affected.