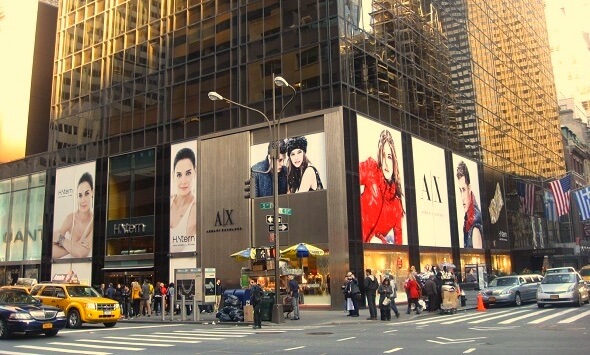 The Manhattan’s mini-warehouse type space will be home to inventory for same-day delivery, product returns and pickups in New York.

Fifth Avenue in Manhattan where the tills never stop ringing and where customer is the ultimate king is now welcoming a Martian in high spirits.

The Manhattan’s mini-warehouse type space will be home to inventory for same-day delivery, for product returns as well as pickups in New York. The Seattle-based company may even use the space to showcase its product line such as Kindle e-readers as well as tablets, in addition to the underperforming Fire smartphone and Fire TV set-top box. Amazon’s same-day delivery service will be offered in 12 cities, including New York, Los Angeles, Atlanta and Phoenix. In short, Amazon is just in time for holiday shopping!

“It’s about marketing the Amazon brand,” said Matt Nemer, a Wells Fargo analyst. “Same-day delivery, ordering online and picking up in store are ideas that are really catching on. Amazon needs to be at the center of that.”

Amazon has disrupted the world of e-commerce by offering products at a much lower cost than numerous brick-and-mortar stores. A pioneer in bringing forth the comparison app tool that introduced the trend of “showroom buying” where smart buyers would visit physical stores to see the product and then head home and buy them online to save money. A physical store will also facilitate an opportunity to accumulate data on real-time consumer buying patterns.

Amazon may also benefit from increased sales. According to Andy Dunn, CEO of New York-based clothing store Bonobos, consumers are more likely to spend twice as much at a physical store in comparison to online buyers.

Richard Doherty, an analyst at Envisioneering Group, says Amazon offering same-day delivery could turn out to be “a tremendous uptick for tourists” and create “tremendous volume,” Doherty says.

Amazon is yet to make any official announcement on it opening its first physical store in Manhattan.

Tim Bajarin, an analyst at Creative Strategies, says there are a few retailers who sell Kindles such as Best Buy and Wal-Mart. By opening a physical retail store, Amazon will be able to present its products in front of buyers. “There’s still a segment of the population that’s touchy-feely,” says Bajarin. “They want to see the product up close, and have it shown to them.” He further added that by opening in New York during the holiday season, Amazon will “get high traffic, and the kind of feedback it needs to see if it wants to expand.”

As indicated by the Wall Street Journal, Amazon will open the storefront near the Empire State Building on 7 West 34th Street, and a block east from Herald Square, to take on Macy’s and Herald’s other retailers.

Anna Domanska
Anna Domanska is an Industry Leaders Magazine author possessing wide-range of knowledge for Business News. She is an avid reader and writer of Business and CEO Magazines and a rigorous follower of Business Leaders.
« Symantec might be the next Silicon Valley company to split up
Apple Supplier GT Advanced to shut down operations in Mesa, Arizona »
Leave a Comment
Close