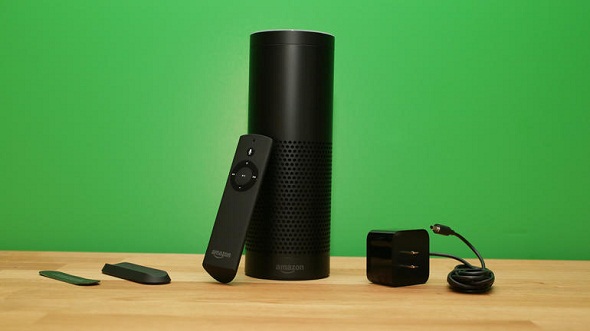 Amazon Echo is a voice-powered device for an in-home general purpose computing experience, with 9.25 inch cylindrical black speaker that can sit around the kitchen counter and provide information like Siri.

Amazon Echo’s features: This home gadget has a futuristic-looking cylindrical black speaker that was made available in the market to a limited number of people by Amazon – seven months ago.

Amazon also offers an option to purchase its accessories like remote control for Echo. So, now if you want to execute any command sitting on a sofa chair, in that case you just need to use remote control to control home appliance as per your command. The device also controls WeMo-enabled smart switches, and Philips Hue bulbs. The device controls are smart and granular that lets users to control Hue bulbs by simply saying the command for executing it more than once at a time.

Apple’s Siri and Google Now come with always-on functionality, when these devices are plugged into power. But, Echo declines, when it cannot get plugged directly with the services like iMessage or Gmail services.

Amazon Echo’s vice president, Greg Hart stated they are much existed about Echo, which is getting into the hands of millions of customers, and keeps on rolling out new updates, features, and experiences for the devices to make it more useful for the users. The company revealed that during the best-period of the device, Its audience gave their feedback for the device, and also stated how the device lacks connectivity to widely-used softwares, and applications, like, Google Calendar, and Philips Hue bulbs.

Amazon took these feedbacks based on which it started working on its integrating and salient features and more.

Greg Hart added that they are very thankful to their customers for their incredible engagement and providing them invaluable feedbacks to help shape Echo, as it evolves in the market. By using those feedbacks, the company has been able to etch features like Pandora, home automation, sports scores, Audible, calendar, and more.

Amazon Echo’s Alexa – the core functions in the said device is having a cloud-based framework. This means that more features and updated will be rolled out soon, to make device better than current one, making it available in the market soon for all users.

Amazon Echo’s Price: By gaining a huge popularity in the market, Amazon has decided to sell it to anyone willing to shell out $179.99 starting on July 14, and its remote control worth of $29.99, as an extra charge, during the purchase.

Anna Domanska
Anna Domanska is an Industry Leaders Magazine author possessing wide-range of knowledge for Business News. She is an avid reader and writer of Business and CEO Magazines and a rigorous follower of Business Leaders.
« Boeing named Dennis Muilenburg as its new CEO
HBO NOW Earns More from its New Standalone Streaming Service »
Leave a Comment
Close