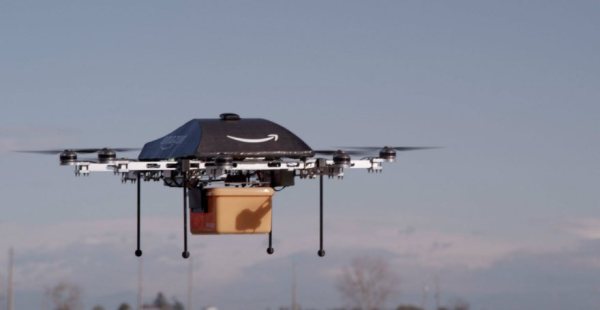 World’s largest online retailer, is testing unmanned drones to deliver goods to customers, you might think this is impossible or sounds like far future with taste of science fiction. Well, according to Amazon and their chief executive Jeff Bezos, something you have ordered through Amazon might literally fly to your doors within 30 minutes in their future delivery, but when they say future, they mean near future.

Drones, when it comes to Amazon ones, “little flying robots”, carrying package up to 2.3kg might become seen as often as any other delivery truck on the road. Just with the difference is that Amazon drones will be seen flying in the air and trucks will probably still use road in the future. The service will be called Prime Air and drones are already now known as Prime Air vehicles while Amazon is taking this step to improve delivery in future beyond any expected border. Man would think that boost growth is not important for the world’s largest online retailer but all the steps they have taken lately including this one seems like they want to insure their position on the top in the future as well. It started with free two-day delivery via its popular Amazon Prime membership program, then same-day delivery for groceries and latest before Prime Air teaming with the U.S. Postal Service to deliver Amazon packages on Sundays, so Prime Air is just their next step to maintain the largest ones.

When will Prime Air fly to your door?

The Amazon drones are called Octocopters, and the fact that they could deliver packages weighing up to five ponds to customers is not an issue at all since that weight covers up to 86% of all the items that Amazon delivers. But the fact that with the drones you can get the package within half an hour is more than thrilling, but the bad news is that it might take up to five years for the service to start, since the US Federal Aviation Administration is yet to approve the use of unmanned drones for civilian purposes.

From a technology point of view, Amazon seems to be ready to enter commercial operations as soon as the necessary regulations are on their side. FAA has in last few years approved the use of drones for police and government agencies and with about 1,400 permits. If we take into consideration their statement that they are ready including expectation of Civilian air space which is to be opened up to all kinds of drones in the US by 2015 and in Europe by 2016, Prime Air might fly to your doors in near future.