Amazon on Wednesday unveiled its long-rumored smartphone Fire phone at an event in Seattle. The new Fire phone is a high-end handset boasting new breakthrough innovations that could ramp up the crowded smartphone market dominated by industry heavyweights like Apple and Samsung Electronics Co.

Amazon founder and CEO Jeff Bezos demonstrated the device that has a 4.7-inch HD display that will give user’s direct access to other devices and free help service from the company.

The Fire Phone, Amazon’s first smartphone of its own features decent specs, a 2.2GHz quad-core Qualcomm processor, 2GB RAM and a 13MP OIS camera that can record up to 1080p high-definition videos and runs on Amazon’s custom Android interface.

The handset relies on features like “Dynamic Perspective” a sensor system that recognizes a user’s every head-move. Essentially, the four front-mounted infrared cameras change what is being displayed on screen in relation to angle of the user’s view of the screen. The phone can then adjust the image accordingly creating a 3D-like experience.

The Fire phone will also come equipped with an image-recognition technology, called Firefly that will allow users to identify almost any product from book covers, CDs, DVDs, songs, movies, grocery items, phone numbers and websites and presents them onto the phone directing user’s to Amazon to make purchases. The phone also employs audio recognition for movies and television shows, which Amazon also carries.

The Fire Phone launches in US on July 25 and is available exclusively on AT&T as the wireless carrier. 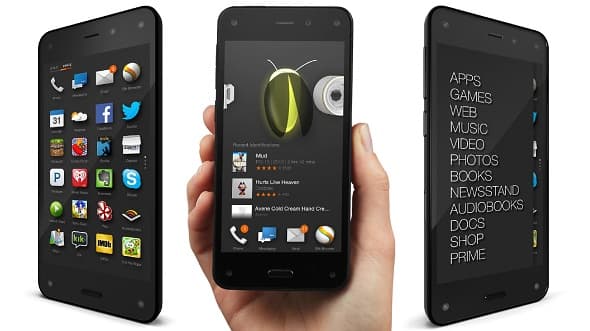 It was expected that the Fire phone would be far cheaper than iPhones or Galaxy devices, given Amazon sold its Fire tablets at cost. The 32GB phone will be available for $199 with a two-year contract and a 64GB model will cost $299 on the same contract.

Shares of Amazon rose 2.5 percent to $333.67 on Wednesday’s trade as Bezos presented on the smartphone’s features.

The introduction of the smartphone represents the world’s largest online retailer’s evolution from online commerce to mobile phones, which are increasingly being used to purchase items and view video. Amazon has introduced a range of consumer electronics devices, including e-readers, tablets, and television streaming device boxes, as a strategy to bring its online store and digital services more openly in front of customers. The new device fits with Amazon’s larger aim to develop a more efficient shopping experience while driving more people to its retail products.