Amazon Attempts to Take over Electronics Market with New Tablet 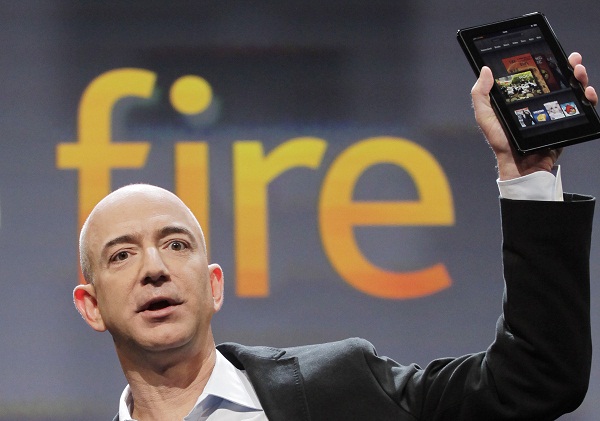 Online mega retailer, Amazon.com Inc., is projected to unveil a brand new Amazon tablet this Thursday. This could be the latest attempt by the company to gain control over the market in the ensuing struggle for domination of portable access to the World Wide Web.

Launch of the New Tablet and Kindle

According to press reports, Amazon.com is believed to showcase a minimum of one new 7-inch version of its popular e-reader, the Kindle Fire, in a media conference held close to the city of Los Angeles. Market rumours suggest that a large new Amazon tablet may also be unveiled together with an update, meant for the company’s Kindle Fire e-reader.

Market analysts believe that the deciding factor in the prospect of the upcoming Kindle Fire e-reader will depend on how much the pricing of the device can attain towards the downside. Amazon.com Inc. seems to be fine with making a less amount or even no money at all by selling e-readers and tablet devices as it has a plan to spread the device to as many people as it possibly can. The company will subsequently make a more engaged and connected base of consumers purchase digital content, including music, games, videos, apps and books, which comes with a higher price-margin.

It was only last year that Amazon.com Inc. managed to surprise both shareholders and market competitors by launching its first tablet with an affordable price tag of only $199 which was much less than the iPad launched by Apple Inc. Not only that, other tablets present at the time cost a lot more than Amazon’s model. In spite of less than satisfactory reviews, the device was  a profitable seller and allowed Amazon to take over more than one fifth of the total tablet market in the United States. This fueled Google to begin selling its Nexus 7 tablets also for $199, but with superior features. Barnes and Noble, on the other hand, slashed prices of a particular Nook model to $179. The upcoming tablet, Surface, from Microsoft Corp., is also expected to be priced at $199.

Rules of the Industry

Amazon.com Inc. is currently engaged in a legal battle with Google Inc. as well as other large scale companies in the technology industry, so that it is able to gain a foothold in the increasing profitable tablet markets since these gadgets are on the fast track to becoming the ideal tool for logging onto the Internet. Being the biggest Internet retailer around the world, it is extremely important for Amazon to establish a major authority in this relatively new area. Most analysts hold the opinion that a successful new Amazon tablet seems to be needed more for Amazon, rather than Google. They think that Amazon is required to have gadgets that can allow consumers to buy and enjoy digital content.

Amazon.com  Inc. happens to be one of the most renowned sellers dealing in CDs, video games, DVDs and books. But as these items continue to go digital, the company also needs to make its move fast in order to ensure that it is able to maintain its portion of this rapidly developing market.

If a new Amazon tablet under the $150 mark is unveiled it could very well turn out to be kind of a game changer for the industry which no longer considers the $199 price to be unique. On the bright side, the manufacturing cost for the Kindle Fire e-reader has dropped since it was introduced last year, enabling the company to bring down the price by a sufficient degree. Amazon can also cut costs for the new Kindle Fire e-reader by launching a version which is going to be supported by ads. App and game developers have already expressed interest in the Kindle platform since customers of Amazon make use of the one-click payment method and are habituated to paying for approval. The company may be missing the massive audience range gathered by Google Inc. and Apple Inc. but it might be able to alter the situation if its new tablet becomes successful.