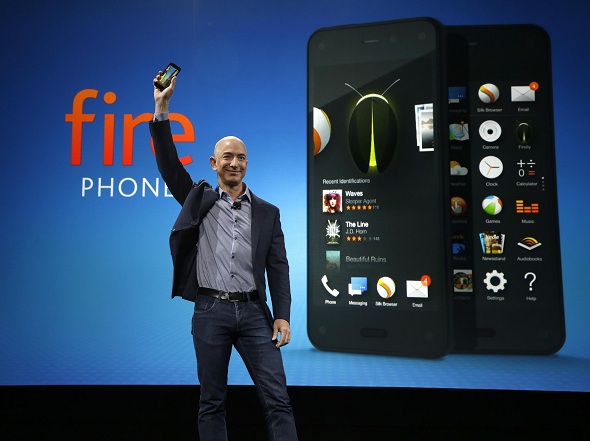 On Monday, global e-commerce giant Amazon announced that it just dropped the price of its maiden smartphone, the Fire phone from $199 to $0.99 with a two-year contract with AT&T.

The Fire Phone has two variants, a 32GB and a 64GB. The $0.99 goes for the basic 32GB with a two-year contract, a year of Amazon Prime membership and various other cloud services while the 64GB gets its price cut from $299 to $99, Amazon said in a statement.

Beginning September 30, Fire phone will be made available in the UK and also in Germany where consumers can purchase the device under contracts with Amazon’s telecom partners.

The announcement comes one day before Apple is expected to unveil the iPhone 6. The Fire phone competes in the over $150 billion global market with Samsung’s flagship Galaxy S devices and Apple’s iPhone.

Additionally the phone has two main unique features like Dynamic Perspective and Firefly. Dynamic Perspective uses a new 3D sensor system which allows it to react to how it is held. The system which uses infrared lights and cameras mounted on the phone’s surface to track a user’s head movements and render 3D effects within certain applications like maps, shopping and games.

And Firefly, which can scan more than 100 million products and made it easy to order them from Amazon, was another innovation. It can identify Web and e-mail addresses, phone numbers, QR and bar codes. It can also capture songs, movies, TV programmes and products. Users can see product details, include items to their Wish List or order them on Amazon.com.

Amazon did not reveal the sales figures for the smartphone.

In 2007, Amazon launched its first gadget Kindle e-reader. Even though many devices have followed since then but Kindle still remains one of the most popular e-book readers in the market. In 2011, the company released Kindle Fire tablets and in April this year, it launched its Fire TV streaming devices.

With 25.2 per cent of the market share, Samsung is the market leader in the quarter with Apple in the second place with 11.9 per cent, followed by Huawei with a market share of 6.9 per cent.