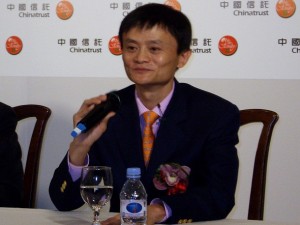 Chinese business tycoon – Alibaba’s Jack Ma is referring to the Internet as a “Treasure Island” and said that he has planned to use his business as an “e-WTO” for small-businesses across the globe.

Founder and CEO of Alibaba – Ma addressed small-business owners and executives Wednesday at Millennium Knickerbocker Hotel Chicago as a part of a visit this week to court American businesses. He has joined American Express CEO and Chairman – Ken Chenault in conversation at a lunchtime, following a private meeting with Chicago Mayor – Rahm Emanuel.

Chenault has directed the conversation, who touted his own company’s dedication to small businesses, pushed the Internet as a friend rather, foe for small-business entrepreneurs. He said that American Express and Alibaba worked with Emanuel to have the occasion in Chicago, as it truly is the middle of America. Additionally, Chenault commended Chicago’s powerful business history.

Ma recounted his experience from beginning of his small business, including the one that became Alibaba. He said that he has chosen the name Alibaba to transfer his believe that – the Internet is a treasure island for small and med-size businesses, also called SMEs.

Alibaba.com is China’s largest ecommerce company and one of the world’s most significant tech organizations. Ma has stated that, unlike Amazon, Alibaba does not purchase, store or offer products, rather, it facilitates those types of transaction mainly for small businesses.

According to McKinsey & Co, Ma is courting U.S. small businesses to make use of his platform to offer to China’s rising white collar class – projected to achieve 630 million by 2022.

On Wednesday, Ma shared great numbers, gloating that Alibaba highlights 120 million day by day shoppers, and that 350 million active users are purchasing on the company’s online platforms. He said that the company did $9.6 billion in sales on Black Friday.

According to a source, Ma has emphasized past remarks about his desire to sell $1 trillion in merchandise on Alibaba’s platforms by 2019. On Tuesday in New York, he said that he aimed to increase percentage of earnings that were derived from outside China to 40 per cent, up from 2 per cent at present.

Wednesday in Chicago, Ma called Alibaba an e-commerce enabler, and said that he wanted to use its services — that cover finding customers, logistics, and payments, to make “e-WTO” for small businesses around the globe.

Ma revealed that his inspiration to bolster small businesses – at the beginning, it was his passion to discover and empower those small organizations, and now, it has more responsibility and love he etches for SMEs. He asserted that the ability for small organizations to eventually develop into big businesses that would be an advantage for Alibaba, if they are ready to signed on early basis to sell the company’s platforms. Further, he added that with the move, China will become the largest importer of products in the world by next 20 years. The nation’s common resources can’t keep up with the manufacturing demands of its developing population.

Jack Ma contemplated that if China keeps on exporting, the company won’t have a view of the blue sky again.

Jack ma is the second – richest business tycoon in China, and he escalated to the upper echelons of riches, following a historic 2014 initial public offering (IPO) of his e-commerce company that reportedly forms 80 per cent of China’s online sales.

The debut on the New York Stock Exchange valued the e-commerce company at $25 billion. Its first-quarter earnings topped analyst estimates to reach $2.81 billion.

Micaeh Johnson, who owns her own PR firm, was among around 300 who went to Wednesday’s event. She said that she has appreciated comments from a group of people who referred to Ma – as more of an artist than a businessman – who thinks that Ma, being so artistic and creative was able to really evolve Alibaba.