The aerospace company releases designs for planes that would run on hydrogen.

European aerospace giant Airbus recently revealed details of three hydrogen-fueled concept planes. These planes would start their service by the year 2035. The designs that are popularly known as ZEROe differs in size and style, but have zero-emissions and aim at protecting the environment. The planes would use hydrogen as their primary source of energy power.

The designs include an aircraft that will use turbofan engines and carry around 120- 200 passengers onboard. The planes have a range of more than 2,000 nautical miles, and would be driven by an emphatic “modified gas-turbine engine that runs on hydrogen, rather than jet fuel, through combustion.” The designs show that liquid hydrogen would be stored behind the rear pressure bulkhead of the plane. 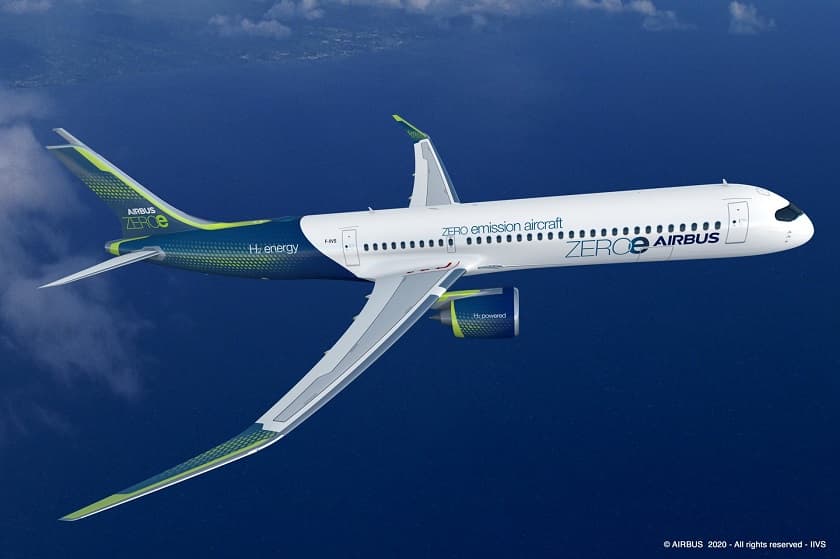 Airbus revealed another system using turboprop engines, wherein the aircraft would be powered by modified gas-turbine engines that would have a range of more than 1,000 nautical miles. These planes would, however, carry fewer passengers. A third future Airbus design releases showed a radical vision of how the aeroplanes could look in the future. The aircraft would take around 200 passengers, and the “blended-wing body” concept of the plane would see the wings “merge” with the aircraft’s main body.

“I strongly believe that the use of hydrogen – both in synthetic fuels and as a primary power source for commercial aircraft – has the potential to reduce aviation’s climate impact significantly. These concepts will help us explore and mature the design and layout of the world’s first climate-neutral, zero-emission commercial aircraft, which we aim to put into service by 2035”, Airbus CEO Guillaume Faury stated.

Within the aviation industry, many low- and zero-emission planes have been introduced in recent years. In June 2020, a battery-electric aircraft flew over England and was described as U.K.’s “first commercial-scale electric flight.” Earlier in May, a Cessna 208B Grand Caravan aircraft having 750-horsepower all-electric motor completed its maiden flight, after its takeoff from an airport in Moses Lake, Washington.

Earlier examples of innovative planes include the Solar Impulse 2. This is a crewed aircraft that is solar-powered by the sun. In 2016 the Solar Impulse 2 managed to circumnavigate the globe without any fuel, although the trip conducted in 17 separate sessions.

Airbus has marked the deadline of 2035 to create a carbon-free commercial aircraft and bring it to service, a target that engine makers like Safran termed as ‘too ambitious.’ The aircraft design is the latest effort to draw public attention to make “zero-emissions” after European governments pushed for cleaner technology as a part of their post-COVID recovery plans.

Airbus is also working on a demonstrator, results of which are expected in 2021. “The demonstrator design Airbus will allow our company to assess the most emerging promising architecture,” Airbus Chief Technology Officer Grazia Vittadini stated. “We see the demonstrator as it would apply to all Airbus stock products eventually.” To achieve the 2035 goal, Airbus would require readied technologies by 2025, according to her. However, the path has many challenges, like finding ways to safely store the volatile liquid hydrogen during flight at freezing temperatures. Airbus dismissed the concerns about hydrogen being unsafe and called for massive investment in new energy infrastructure concept.

While hydrogen as a fuel has been in discussions since the 1970s, it is too expensive for widespread use. According to Airbus, the hydrogen used for aviation will be produced from renewable energy and also extracted from water through the process of electrolysis. This would be a carbon-free process if powered adequately by renewable electricity, though it’s a superbly expensive procedure.