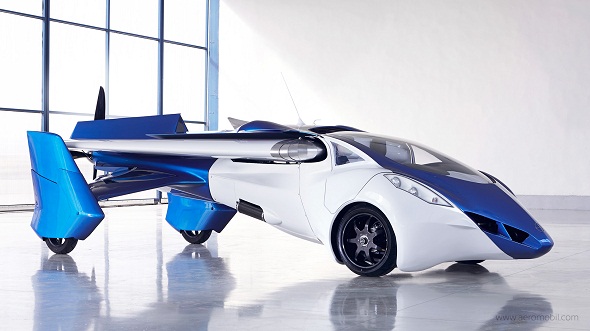 AeroMobil, a startup from Slovakia, unveiled a flying car at the Pioneers Festival in Vienna late last year, making the sci-fi lore a reality. But that’s not enough for the company. It now plans to build a car that not only flies, but does so without human intervention.

At SXSW, AeroMobil CEO Juraj Vaculik spoke about the company’s past and future and the challenges that remain to go from prototypes to fully fledged consumer vehicles – which the company plans to achieve in 2017.

AeroMobil has created the sporty two seater flying roadster that could transform into a light sports aircraft and take off when it has a grass runway of about 800 feet. The idea is to take a trip of about 500 miles without the need to switch vehicles, which cuts out waiting in airports. The company eventually wants to build a self flying car without the driver having to operate the thing. According to the current vision, the driver would also need a pilot’s license for once the vehicle takes flight.

AeroMobil emphasized that for now the focus is on building the first prototype, which needs human operation, but wants the next version to be automated. AeroMobil is a finalist at the South by Southwest Interactive Innovation Awards, which will be held Tuesday, at the tech, film and music festival.

Stefan Vodocz, the company’s chief communication officer, that in the coming 10 years from now, it will need to be automated. It would be possible with an algorithm, although it would be managed much better by a computer than by a man.

Currently, Cars are the fascination of the technology industry. Google said it plans to have a self-driving car technology in about two to five years for widespread use. Apple is also developing its own car; the tech giant is reportedly pushing to kick-start production by 2020. Also Tesla has popularized electric cars.

Founded in 2010, AeroMobil launched the most current version of the prototype, called the Flying Roadster, in October. The company knows it has an arduous battle in overcoming technical, regulations and legislation hurdles. For instance, Google has been working with the Department of Motor Vehicles as it tests its driverless car.

The company hopes gas stations in the future will double as mini airfields where cars can legally take off. In less-developed countries, AeroMobil hopes the administration can spend little on infrastructure like roads. The prototype took nearly ten months to develop, Vadcocz said, though the company did not specify how much it cost to build.

Anna Domanska
Anna Domanska is an Industry Leaders Magazine author possessing wide-range of knowledge for Business News. She is an avid reader and writer of Business and CEO Magazines and a rigorous follower of Business Leaders.
« VAIO’s First Ever Android Smartphone Launched In Japan
Uber teams up with China’s BYD for electric car testing »
Leave a Comment
Close