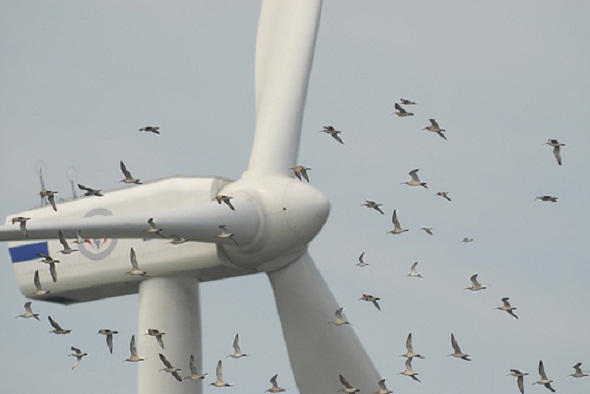 An advocacy group urges to have wind turbine rules to protect birds and other species.

Last year, a golden eagle was seen flying over a wind turbine, a wind farm located at Converse County, Wyoming state of U.S. After this, an advocacy group claimed weak federal policies that are allowing wind energy industries to locate wind turbines in regions where birds are fatal to collision.

Especially, in the eastern Michigan’s farmland where birds are migrating between summers nesting regions – Canada’s boreal forest, and wintering ground to the south. And below, on the ground, the wind energy companies have planted wind turbines, which are dangerous to birds.

According to the American Bird Conservancy report, more than 30000 turbines were installed by companies nationwide. Around 50000 others are planned for construction in areas where birds are vulnerable to confront fatal collisions.

Areas that the group considers sensitive region from the Prairie Pothole district of the Great Plains, home to the debilitated piping plover, to the whole condition of Hawaii, where 32 bird species that exist are recorded as endangered and threatened. Another is Huron County, at the tip of Michigan’s Thumb, where 328 turbines as of now generate power and nearby authorities have endorsed 50 more.

A group that is supported by wind energy developers said that the report is flawed and overstates the number of wind turbines on the drawing board.

The coordinator of a conservancy program, which encourages – bird smart wind energy production, Michael Hutchins said that wind turbines are among the fastest-growing threats to our nation’s birds.

Voluntary guidelines that were issued in 2012 by The Fish and Wildlife Service urges wind energy companies to consider risk to birds and other species. When choosing wind turbine locations, it said that some regions may be inappropriate for development as they have identified as having high wildlife value based on their ecological rarity.

The government said it can regulate wind development only on lands it administers, like national wildlife refuges. At a different place, it can threaten legal action against such wind companies whose turbines kill birds’ species that are protected under federal law, such as golden and bald eagles. Till now, the U.S government has charged and reached settlements with only two wind energy companies for such kills.

Spokesman Gavin Shire said that the Fish and Wildlife Service is inquiring in 16 other bird deaths’ cases at wind facilities, and five of them have been introduced to the Department of Justice for possible prosecution.