Beware Burrito Lovers! Chipotle plans to charge you up to 5% more for your favourite meal !! 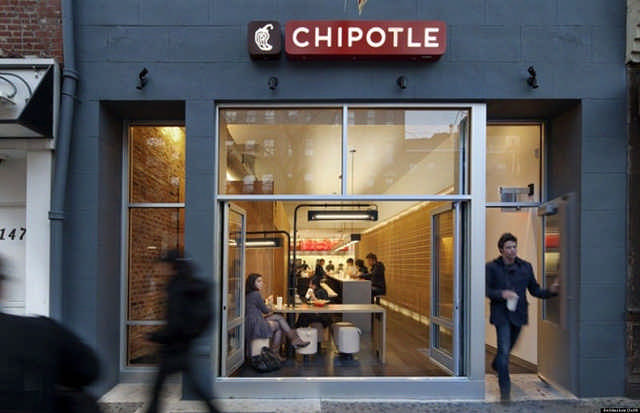 A new, controversial ad campaign hit the press which features a flexing, overweight male with a message that says eating two ‘all natural’ Chipotle burritos a week could make you gain 40 pounds in a year.

Chipotle Mexican Grill Inc, known for its indulgent burritos is at the center of controversy yet again. The restaurant claims of being GMO-free, antibiotic-free and generally a healthier option compared to other casual restaurants.

A new, controversial ad campaign hit the press which features a flexing, overweight male with a message that says eating two ‘all natural’ Chipotle burritos a week could make you gain 40 pounds in a year. The aggressive ad campaign clearly mocks the notion that eating at Chipotle is a healthy life choice.

The campaign launched in a full-page ad in The Post Thursday includes a Web site, known as Chubbychipotle.com.

It was being speculated that rivals like McDonald’s or Wendy’s might be behind it, but the Center for Consumer Freedom (CCF) who claimed responsibility said there is no single company or industry paying for the campaign. CCF is a non-profit organization which lobbies on behalf of the food companies.

Earlier in April, Chipotle announced that it had removed genetically modified organisms, or GMOs, from its food. However, it was pointed out that the restaurant’s announcement was simply to highlight its switch to non-GMO corn and soybean oil. Chipotle dishes are loaded with cheese, sour cream and cheese ingredients sourced from dairy farms that also utilize GMO feed. The restaurant still serves meat from animals raised on GMO feed and its beverages contain a sweetener made with genetically modified corn.

According to Chipotle’s website, most Chipotle burritos with protein, rice, beans, cheese, and guacamole are about 1,000 calories that it is about half of the recommended daily calorie intake for an adult. However, public health experts have warned that they exceed daily recommended allowances for calories, sodium and saturated fat.

The company said it differs from other chains because diners choose what goes into each Chipotle meal.

Chipotle came under fire for reversing its decision on antibiotics use in livestock. The Chubby Chipotle site goes beyond the misleading marketing claims and takes aim at Chipotle’s commitment to antibiotic-free meat, saying it’s unhealthy for animals because these medicines are used to treat sick animals. And recently Chipotle cited tight supplies for its decision to allow a UK-based pork supplier to use antibiotics to treat animal illness only when necessary.

Chipotle spokesman Chris Arnold called the ad campaign a premeditated effort to malign the company. He said that Chipotle has always been transparent about GMOs in beverages and called the lawsuit that was filed on behalf of all California consumers as meritless and filled with inaccuracies.

Christy Gren
Christy Gren is an Industry Specialist Reporter at Industry Leaders Magazine she enjoys writing about Unicorns, Silicon Valley, Startups, Business Leaders and Innovators. Her articles provide an insight about the Power Players in the field of Technology, Auto, Manufacturing, and F&B.
« Samsung Launches SLEEPsense, a Device to Improve Sleep and Control Home Appliances
Uber adds another $1.2B to its War Chest in Ongoing Fundraising Round »
Leave a Comment
Close