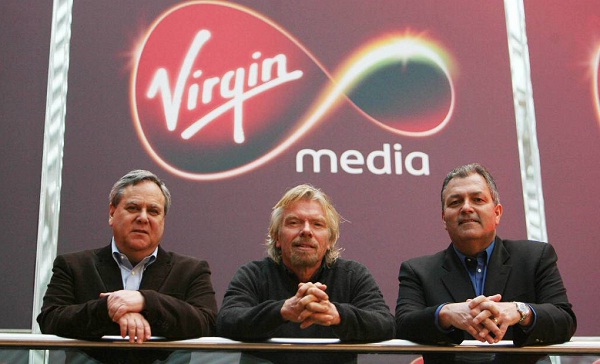 Virgin Media to be acquired by Malone's Liberty Global

The acquisition of Virgin Media will open a new chapter in the history of John Malone’s cable group, Liberty Global Inc. According to a statement, Liberty Global Inc. will pay about $15.75 billion in stock and cash for the purchase of the British cable group. The acquisition of Virgin Media will increase competition in the UK pay television market, thus putting Rupert Murdoch’s dominance at stake.

Liberty Global Inc. and Virgin Media Inc. confirmed a deal which will be the biggest media takeover in about 6 years. The acquisition of Virgin Media, which is the UK’s second biggest pay-TV provider after Rupert Murdoch’s group BSkyB, was carefully planned and thought over as the John Malone’s cable group aims to gain a bigger market share in the Europe’s market.

According to the deal, Liberty Global Inc. will pay as much as $15.75 billion for the acquisition of Virgin Media Inc. as the contract values the company, in which Sir Richard Burton owns a 3 percent stake, at $47.87 a share. Furthermore, data shows that including debt, the company is valued at more than $23 billion. Analysts underline that Virgin Media Inc., which was hit by an expensive network expansion, has potential for growth. Certainly, Liberty Global Inc., which is present in several European countries including Belgium, saw potential and benefits as it decided to acquire the UK cable group. Mike Fries, chief executive officer at Liberty Global Inc., underlined: “Adding Virgin Media to our large and growing European operations is a natural extension of the value creation strategy we’ve been successfully using for over seven years.”

Under the terms of the contract and law, the takeover of Virgin Media Inc. is a subject to shareholder and regulatory approvals. In addition, Virgin Media Inc. also informed that it saw its operating profit climb approximately 30 percent to slightly over £699 million last year. According to data, about 88,700 new customers decided to use its services in the period. Analysts note that John Malone’s Liberty Group wants to use Virgin’s knowledge and skills in serving business customers. As it was highlighted, business customers amounted to approximately 15 percent of the company’s revenue.

John Malone’s Liberty Global Inc. has already been active in the European market, yet the successful acquisition of Virgin Media would allow the company to reach to about 25 million clients. Therefore it would open a new chapter in the company’s history in Europe. But those, who know John Malone, also note that the acquisition of Virgin Media is aimed at taking advantage of the UK’s cable group’s tax losses.

What is more, the acquisition of Virgin Media will certainly make Liberty Global more dangerous for British Sky Broadcasting Group Plc, which is partially owned by Rupert Murdoch’s News Corp. John Malone knows how to play a game as he uses Liberty Global Inc. to enter new  markets outside the US. Analysts are strongly convinced that the acquisition of Virgin Media is a perfect decision and it will lead to a successful future of the company as John Malone continues with his strategy aimed at reducing internal costs and external costs as well.

Anna Domanska
Anna Domanska is an Industry Leaders Magazine author possessing wide-range of knowledge for Business News. She is an avid reader and writer of Business and CEO Magazines and a rigorous follower of Business Leaders.
« Japan Airlines Raised Earning Estimates
India to see its economic growth slow down to 5% »
Leave a Comment
Close