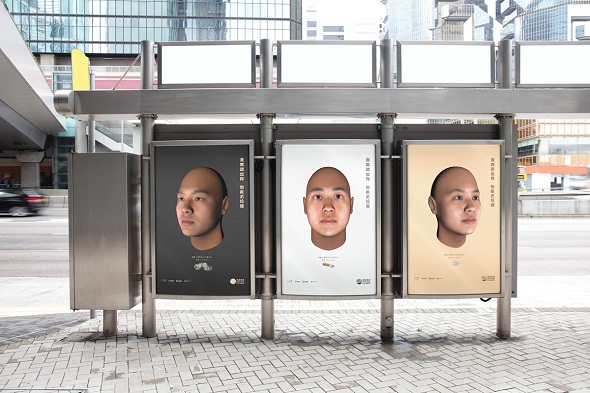 It’s a very shameful thing when someone litters in public places, and even after doing such a shameful act, they go on their way thinking there’s nothing wrong in littering in public. Well, things in an Eastern city, might soon change! When such people litter, their posters will be put up around the city, publicly shaming them for their acts.

With an initiative to create awareness and to spread a social message for creating positive social awareness, a Hong Kong-based ad agency by collaborating with Virginia-based genetic technology company is using people’s DNA samples of those who had left behind litter, and has posted images on wanted poster by using computer-generated programs.

Last month, the company’s first campaign project was launched in Hong Kong, to create a social awareness amongst the Hong Kong civilians, as reported by the South China Morning post. Yet, the idea behind using a Biogenfutures/ Vimeo has existed from several years.

A New York-based artist – Heather Dewey-Hagborg, used the same techniques to make human sculptures of strangers, using a sample DNA, which people had left behind on chewing gums, and discarded cigarettes. Dewey-Hagbord accumulated those samples from the streets to carry out her project.

Dewey-Hagborg accumulated each single piece of litter that was rich in genetic data, characteristically curbed in form of DNA, sheathed in dried spit or inside the pieces of hair and skin. To isolate that DNA, she did a simple lab procedure that she carried out at a small community lab in Brooklyn. She used a computer program, which was designed by researchers, at Penn State. She searched through all the DNA, she already had collected, and picked out only those genes, which code for physical human qualities- hair and eye color, and more.

Subsequently, after examining each piece of DNA sample, she used those traits information to create a 3D model of human face. Along with eye and hair color, these small samples of our human DNA also give an indication of our skin’s shade, the width of our noses, and the distance between our eyes. But, having a few traits, can’t predict how old or physically fit we are.

Dewey-Hagborg commented that the masks aren’t the exact replicas of human faces, but somewhat similar to their physical traits, which she described as “family resemblance”.

Unlike Dewey-Hagborg’s artwork that turned people’s leftover DNA into 3D-sculptures, the Hong Kong campaign is using the genetic information, which they had accumulated to publicize large, and life-size wanted posters. The campaign project is an association between Parabon Nanolabs – the genetic technology company, and Ogilvy & Mather Hong Kong- marketing communications agency where the creative agency has collated pieces of local litters, and sent to Parabon Nanolabs center, which further uses its technology to extract the DNA from each littered samples.

Ogilvy Chief Creative Officer, Reed Collins stated to the South China Morning Post that the social campaign was intended to spread a message to make people aware, and create a positive change for Hong Kong civilians. The company intends to make people think twice about littering in public.

Anna Domanska
Anna Domanska is an Industry Leaders Magazine author possessing wide-range of knowledge for Business News. She is an avid reader and writer of Business and CEO Magazines and a rigorous follower of Business Leaders.
« Google is readying ‘Brillo,’ an OS for the Internet of Things
Amazon is introducing new market place for handmade goods »
Leave a Comment
Close