Let’s say you wanted to find a catchy nickname for a day when millions of people would choose to get up very early in the morning and endure all sorts of inconveniences in the name of shopping.

Would you really call it Black Friday?

For the most part, days with the word “black” in front of them have not been considered a good thing, especially for the pocketbook. The stock market crashed on Black Thursday in 1929 and again on Black Monday in 1987. Even the term “Black Friday” has often referred to negative events: A financial panic in 1869, a 1979 massacre of demonstrators in Iran, even a day of expected massive traffic jams during the 1984 Olympics in Los Angeles. And yet Black Friday has become the default shorthand for retail’s most important day of the year, a day when sleep-deprived shoppers with enough coffee, organizational savvy and willpower can — for only a few hours!!! — get amazing, never-to-be-seen-again deals on everything from flat-screen TVs to the latest must-have toy.

The hype has paid off. For the past seven years, Black Friday has been the biggest shopping day of the year in both sales and customer traffic, according to ShopperTrak, which measures shopping habits.

And next week is likely to see the biggest Black Friday in years, according to C. Britt Beemer, founder of America’s Research Group.

He said 49 percent of American households are planning to shop on Black Friday, up from 40 percent in more typical years. Those expectations are based on a phone survey conducted in early November and mean that at least one person in the household has plans to shop on the day after Thanksgiving.

“It’ll be a madhouse, like nothing we’ve ever seen before,” he said. 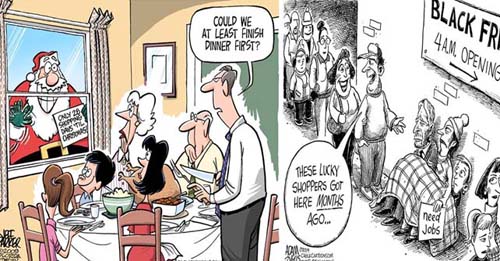 Even before Black Friday came into common parlance, the link between shopping and the day after Thanksgiving was set. In the wake of the Great Depression, President Franklin Roosevelt was even pressured to move Thanksgiving back a week so retailers could enjoy a longer holiday shopping season, according to records in his presidential library.

It’s not clear that Black Friday was initially meant as a positive nickname. A New York Times article from 1975 said the day got its name from Philadelphia police and bus drivers because of the huge traffic mess created by the confluence of holiday shoppers and football fans arriving in town for the Army-Navy football game.
News stories from the 1980s also say store clerks used the day’s nickname because of the pandemonium created by masses of shoppers.

Others believe the term was coined because the surge of holiday shopping supposedly pushed retailers “into the black,” making them profitable for the year. But that kind of thinking is now outdated: Even after enduring the Great Recession, retailers — especially big ones — generally are expected to be profitable year-round. 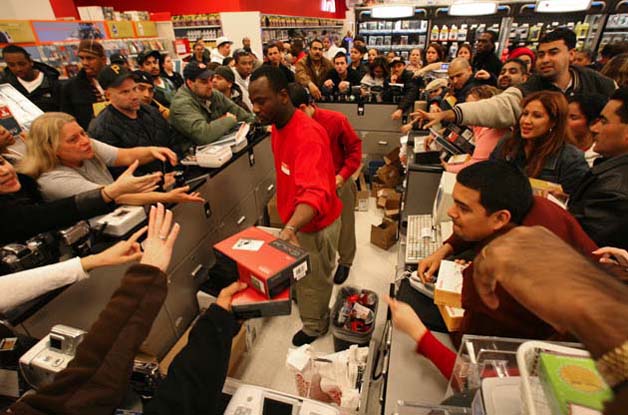 That’s despite a strong push from retailers to promote holiday deals as early as October. Martin thinks those efforts largely didn’t pay off this year because people just weren’t ready to think about stocking stuffers and holiday candles.
“The social aspect of Black Friday (and) the fact that the real deals aren’t really going to go up until then is going to continue to put Black Friday as the top sales day of the year in 2010,” Martin said.

Retailers will welcome the boost. Data from the Commerce Department released Monday showed that while sales for the nation’s merchants gained by the largest amount in seven months in October, auto sales generated the lion’s share of the increase.

Beemer said Black Friday will be big this year because many consumers are expecting to find great deals on big-ticket items, such as flat-screen TVs, that they have put off purchasing because of the difficult economy.
That’s what Eileen Fuessel will be doing.

Fuessel, who lives in Hutto, Texas, outside Austin, plans to take advantage of Black Friday sales to snag a good deal on a new TV.

“I’ve saved all year for this day,” she said.

The 64-year-old and her daughter also expect to get most of their other holiday shopping done in the wee hours after Thanksgiving.

The pair have already started scouring the Internet for bargains and planning their attack.

Although the exact details will not be finalized until Thanksgiving Day, for now they plan to start at 3 a.m. at Kohl’s, where they will look for deals on linens, jewelry and other items.