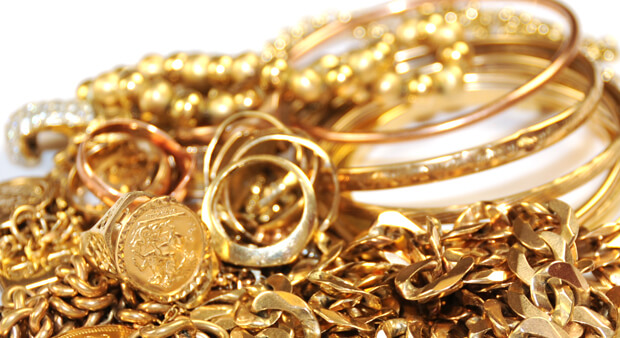 A ceaseless climb for gold

Recording an all-time high for the fourth consecutive session, gold prices touched a never-before price of $1,910 earlier today reinforcing prevalent investor sentiments regarding gold being a safe haven, while equity markets across the world witness massive ups and downs.

With the U.S and European economies continuing to look shaky, the precious yellow metal has recorded a number of highs over the last few months. Following the shake-up in manufacturing and supplies that resulted from the Japan earthquake and tsunami, as well as the American sovereign debt situation, the magnitude of which had just started unfolding globally, gold shot to a lifetime high of $1500 per troy ounce in April this year. Tensions in Libya had furthered this climb, with Gaddafi’s gold reserves worth $6.4billion serving as the dictator’s security blanket.

However, the increase in the yellow metal price over the last month has been much more dramatic than these previous rises, with the last week posting the biggest one-week gain in gold prices over the last two and half years.

Explaining the trend of this massive rise in gold prices, in a media statement, Darren Heathcote, head of trading at Investec Australia, said, “We are not hearing much good news out of Europe or the United States… The picture looks pretty bleak in the short term… For the time being investors are happy looking at gold as safe haven in these troubled times, and will continue to do so until we see something positive and sustainable.”

Investors are closely following news regarding a fresh round of quantitative easing that might be announced by Ben Barnanke, the Federal Reserve Chairman, at the Jackson Hole summit, at Wyoming, later this week.

With QE2 (the last round of quantitative easing) having been conceived at the last Jackson Hole summit, the market is hoping that similar incentives might be announced this year, when Central Bank Governors from across the world gather this week, to revive America’s economic growth.

If this happens, it would involve the U.S printing more money to increase liquidity in the markets, which in turn could weaken the US currency even further. This, according to market experts, is likely to fuel the upward rise for gold prices even further.

Going by the trend followed by gold prices over the last 13 weeks, the precious yellow metal is rising at a rate of 110 per cent, as opposed to the 50 per cent growth rate it has recorded over the past 52 weeks.

With strong speculations regarding the future of the Euro as a currency, alongwith the political impasse in the United States over their debt ceiling and deficit-reduction issues, according to many investors, gold will continue to climb for a long time.

Investor Dennis Gartman writes in his newsletter, Gartman Letter, that “Gold is strong in any and all currency terms and it is now entering that stage when prices go parabolic.”

Suggesting that the prices of gold would continue to rise for quite a while, with the rises sometimes even seeming unjustified, Gartman said, “This will end when it ends. There is really nothing more that can or shall or should be said.”

PepsiCo will sell Tropicana and other juice brands to a private equity firm in exchange for pre-tax proceeds of 3.3 billion dollars.
6 hours ago

Sanofi’s CEO Paul Hudson is dead serious about mRNA technology and capabilities with a $3.2 billion acquisition offer to Translate Bio.
7 hours ago

The entire energy sector yield hovers around 4%, according to the Energy Select Sector SPDR exchange-traded fund.
21 hours ago