Looks like Twitter and Facebook can’t get enough of ripping each other ‘s features out– the social networking giants have turned to imitating each other’s footsteps offering an exasperating case of competition imitation to fiercely  replace the other one.

Twitter’s redesigned mobile platform rolled out several new- impersonated features that mimics Facebook, annoying thousands of tweeple. Twitter declared two new mobile features for its Android and iOS applications offering photo tagging for up to 10 people and the ability to add up to 4 photos in a tweet, where both the features will be displayed in embedded tweets. 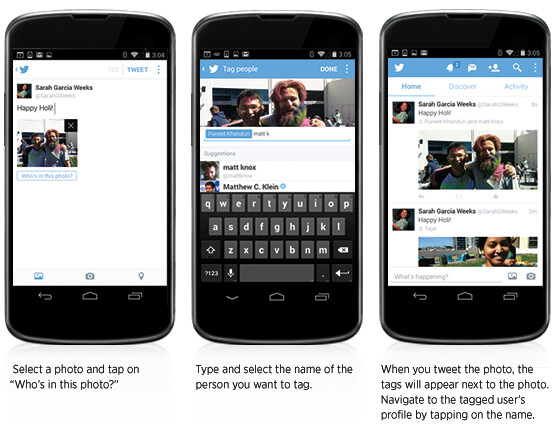 In a bid to beef up photo use on its site, the new update allows users to tag up to 10 people in a photo without losing 140 character count as well as the ability to add up to 4 photos in a single tweet, similar to a collage. Twitter sends out a notification to users tagged in the photo, similar to Facebook’s notification alerts.

After selecting the photo to be shared, users can adjust the tagging option by swinging on to Setting and Privacy to control tagging on photos to avoid spamming. Currently the default option for Twitter users is set to ‘allow anyone to tag me in photos’.

Currently the default option for Twitter users is set to ‘allow anyone to tag me in photos’.

Another update, the picture quartet features a single full image. In order to view any of the pictures, users can tap preview too view it; swipe to move over to the next. 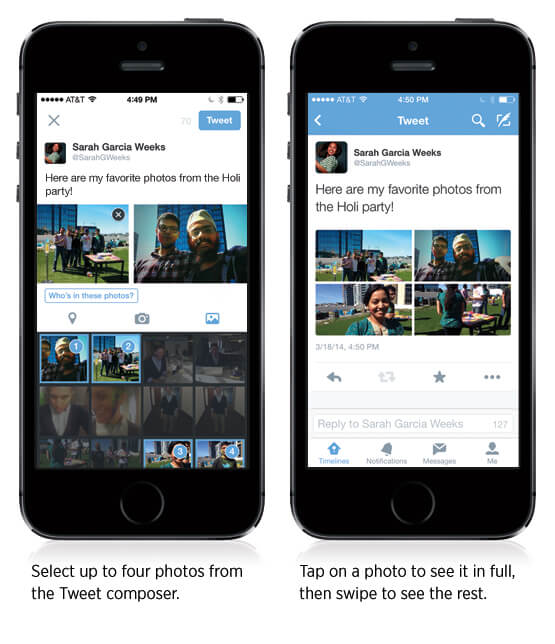 The tagging tool will serve to be a great marketing tool, making conversations easier will users tagged in the photo. iPhone users will be able to use the new update from today, however, Android and desktop users will have to wait for the features to be added for some more time.

The new feature is similar to the one Facebook has introduced several years ago to its users to increase interaction through photo tagging in photos and albums. Instagram also allows users to tag people in photos.

Currently speculation around elimination of #Hashtag and @replies – which are seen as one of the best marketing tools-, are going around in order to make twitter more intuitive, receiving disapproval of thousands of twitter users

To access the new features, users will need to update Twitter App directly from App Store and Google Play.