Technology has certainly progressed beyond anyone’s expectations in the last ten years. Dutch designer Anouk Wipprecht’s latest creation is an updated version of the sinister robotic spider dress, which was first unveiled back in January 2013.

“I was keen on re-creating communicative aspects of animal behavior,” Wipprecht tells Co.Design in an email.

The fearsome garment has been created utilizing 3D printing, which has significantly provided the outline. It uses Intel’s Edison computer chip to power animatronic arachnid limbs that extend from the shoulders and is linked with nearness and breath sensors. When they detect heightened breathing coupled with a nearing presence, they strike at intruders to keep the wearer safe. 3D Robotic Spider Dress has six spiky limbs on its shoulders. 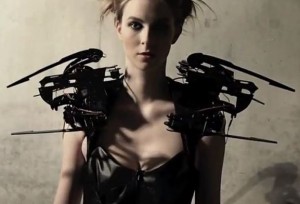 The fearsome garment has been created utilizing 3D printing, which has significantly provided the outline.

“Approach the wearer too aggressively and the mechanical limbs move up to an attack position,” said Wipprecht. “Approach the system under calmer circumstance and the dress just might beckon you to come closer with smooth, suggestive gestures.”

Along the sides of the bodice, shells are embedded with black LED lights that resemble the eyes of a spider that glow depending on the proximity and speed of approach. The dress measures the wearer’s stress levels and the lights will react either by flashing warning signs or glowing softly in welcome.

Last year, Wipprecht collaborated with Austrian engineer and roboticist Daniel Schatzmayr to create a prototype of the Spider Dress. This year, she upgraded the design consolidating with technology company Intel, using their new microcomputer, Intel Edison. It was test-printed with 3-D printing companies Materialise and Autodesk, and the final product was created with Rapid Made, a local 3-D printing company in Oregon.

Some of Wipprecht’s other creations include Intimacy dress, which becomes transparent when it comes in contact with electrical currents; the Smoke dress, which veils the wearer by popping out bursts of smoke; and the DareDroid 2.0, which makes fresh cocktails for its wearer. Then there’s a dress she created that sends shocks to the wearer with 500,000 volts of electricity, the wearer comes out unscathed with the help of built-in Faraday cage.

The Spider Dress more likely seems to be a working example of wearable technology and the use of Intel’s Edison chipset. It will be making an appearance at the CES 2015 event next month in Las Vegas, where more details will be provided about its functioning.