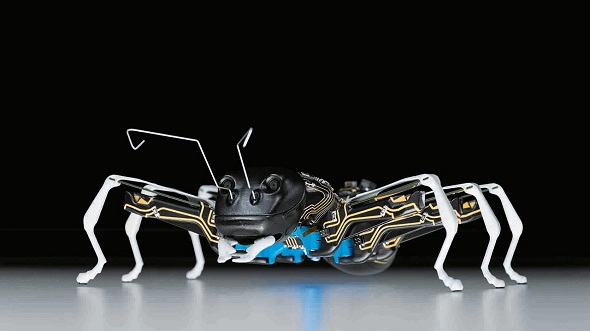 Each Bionic Ant weighs just a quarter of a pound, almost the size of a human hand.

German automation company Festo has created two new animal-inspired robots, butterflies and ants made with 3D printing techniques that could probably be the future of the factory production systems.

The ants, known as BionicANTs, ANT stands for Autonomous Networking Technologies, are intended to recreate the exceptional anatomy as well as the collective intelligence of the real world ants’ to achieve common goals. These qualities of the ants seem to have impressed the Festo developers as they have tried to incorporate it into the intelligent cyborg ants.

The BionicANTs follow simple set of rules and can operate autonomously. The ants converse among themselves to cooperate and coordinate their actions and movements to complete large scale, complex tasks to achieve a common aim, similar to real world ants completing tasks for the entire colony. In small groups they can manipulate objects like carrying heavy loads that they wouldn’t be able to achieve individually.

Festo said that the production systems in the future will be based on intelligent individual components that adjust themselves to various production demands by communicating with each other.

Festo says that the body has been created in a unique way combining the 3D printed plastic powder which has been melted layer by layer with a laser. The electronic circuit on top of the body is also 3D printed. This is the first time the techniques have been combined, Festo said.

Each Bionic Ant weighs just a quarter of a pound, almost the size of a human hand measuring 5.3 inches long, 6 inches width and 1.5 inches height.

The Robotic ant features a 3D stereo camera system in their heads and a floor sensor which together help the ant to work out its location and move towards a specific object and further there are grippers at the front part of its head which helps the cyborg ant to grab the particular object.

Their antennae’s actually works as charging contacts for the lithium batteries that power the ants’ movements. A radio module in the abdomen enables the ants to communicate with each other wirelessly. Just like the natural models, these ants too have six articulated legs.

Festo said that the factories of tomorrow will have to develop customized products, which means they will be required to adapt to various production requirements.

The German engineering company intends to exhibit its robotic ants in April at the world’s biggest industrial technology fair, Hannover Messe, where Festo will also showcase other recent creations like cooperative artificial butterflies.