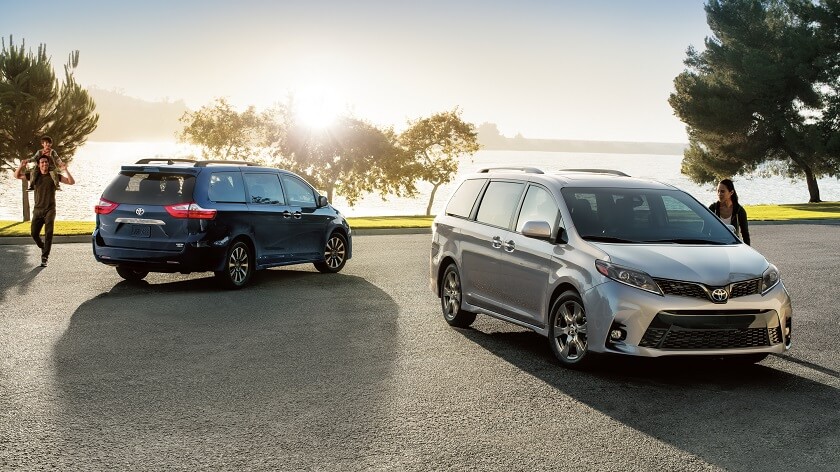 The 2021 Toyota Sienna is a new version of a minivan with a standard hybrid engine and an all-wheel available drive. The 2021 Toyota Sienna minivan will come with an all-wheel-drive, a hybrid that Toyota estimates will also get 33 mpg combined. This is the fourth-generation minivan and comes with more advanced and standard features, updated technology, more premium options, and a brand new look inside and out.

The Sienna, at its core, is a minivan that can seat up to eight people comfortably and comfort with ease. The cabin is streamlined and uncluttered, though most people would be more tempted to ride in the second row as there are ottoman footrests available kicking up from the captain’s chairs. The 2021 Toyota Sienna will go on sale towards the end of 2020.

The vehicle has a combined 243-horsepower hybrid powertrain with or without all-wheel drive is the only offered across the LE, XLE, XSE, Limited, and Platinum lineups. The standard features on the redesigned Toyota Sienna include second-row sunshades, three-zone climate control, high powered windows and power sliding doors, a 9.0-inch touchscreen with Apple CarPlay, Android Auto, and Amazon Alexa compatibility, Bluetooth connectivity, seven USB ports as well as SiriusXM and wi-fi trial subscriptions. The standard safety equipment includes automatic emergency braking with pedestrian detection, adaptive cruise control, active lane control, automatic high beams, a rear-seat reminder, and blind-spot monitors with rear cross-traffic alerts. There are affordable options available that include a built-in vacuum, a refrigerator, and up to 18 cup holders.

Designed and built in the United States, the 2021 Sienna is much sportier than its predecessor. There is a crease that extends from the side rocker panel up over towards the rear wheel into the slim horizontal taillights. The front part has a broad lower grille, honeycombed in XSE trim, and a much more convenient flowing, subtle trapezoidal style with LED headlights sweeping back into the body.

According to Toyota, this style is inspired by a Japanese bullet train.  The standard seating for eight people can be upgraded to fit two captain’s chairs with collapsing ottoman footrests for optimal comfort. The additional seats can slide up to 25 inches to optimize the space for the ones sitting there. The seats don’t stow in the floor, though the middle second-row seats can be removed and moved in the standard set up. There is more space on the front side. The stretched horizontal display of the dashboard conceals a generous storage area beneath the center console.

The Sienna uses the two-motor hybrid system, which is also found in the 2020 Toyota Highlander Hybrid. The 2.5-liter inline-4 engine pairs with two motors in front-drive makes 243 hp and returns a Toyota-estimated 33 mpg combined. Available all-wheel drive adds a third motor to power the rear axle. Electric-only driving of the minivan is available at low speeds under light throttle. An 8-year/100,000-mile warranty covers the hybrid power train.

If the driver wishes to play with the drive system or customize the hybrid display, they can use the 7.0-inch vehicle info display or the 9.0-inch touch screen standard available across the lineup. The Sienna seems to be much roomier than its predecessor. The LE and XLE versions are available with eight seats and a second row that houses only two captain’s chairs split by a middle seat that can be stowed. Some of the XLE models, and Limited and Platinum trims, has seven seats and second-row captain’s chairs. The Front-drive versions of Limited and Platinum have ottomans.

The 2021 Toyota Sienna also has a power-tilting moon roof, a 10.0-inch head-up display, and an available HD rear entertainment centre with 11.6-inch displays. There is a digital rearview mirror that projects images/video from the rear camera. A surround-view camera system also provides a 360-degree birds-eye view around the vehicle, and in parallel parking situations if there is a curb view. The top Platinum model comes with a vacuum and a refrigerator.

Anna Domanska
Anna Domanska is an Industry Leaders Magazine author possessing wide-range of knowledge for Business News. She is an avid reader and writer of Business and CEO Magazines and a rigorous follower of Business Leaders.
« Intel Aims to Reach 100% Renewable Energy Use, Zero Waste By 2030
COVID-19 is Giving Us a Glimpse of the Future of Work »
Leave a Comment
Close