2019 Chevrolet Corvette ZR1 to be the Fastest One

In this day and age where cars are becoming faster and stronger, General Motors will be producing its fastest car – the 2019 Chevrolet Corvette ZR1. Chevrolet is offering its best automobile in two ranges. One will be a coupe while the second will be a convertible. Corvette has often incorporated convertibles in order to give it a more stylish and sporty look. The first model of the Corvette heritage was also a convertible which was displayed at the New York auto show in 1953. In 63, Corvette introduces its ’63 Sting Ray which was a coupe.

The Corvette has brought in a unique ZR1. It offers their riders a convertible along with an automatic transmission. The roof takes around 21 seconds to drop down. This can either be remotely done or while driving at the speed of 30mph.

Tom Peters, Design Chief for Chevrolet, stated, “There was always going to be a convertible.” Chevrolet’s chief engineer, Jordan Lee said, “We broke a lot of dynamometers testing this engine.” The automobile comes with a supercharged LT5 V-8. It runs on 755 horsepower which had cracked the exhaust pipes with its heat at the General Motor’s engine-testing facility. But, it is said that such cases often take place in V-8 engines and therefore is not uncommon. The 6.2-lietr pushrod small-block also produces 715 lb-ft of torque which takes help of the huge 2.65-liter supercharger. 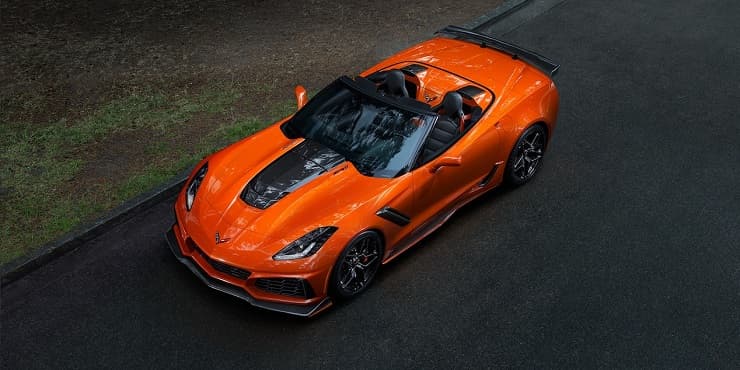 The 2019 Chevrolet Corvette ZR1 is going to be GM’s fastest car.

Considered to be the most powerful Corvette, they have not made compromises on the convertible. The inside body as well as the aluminium track chassis remains the same without any bracing. The suspension tuning also has not undergone any change, whatsoever. The only structural changes are made in order to accommodate the seat belts mounts and also the folding top.

Just like the coupe, Corvette provides a variety for the convertible as well. One is a stanchion-mounted low wing which is smaller and the other is a high wing that is bolted to the chassis. If one goes for a high wing, it produces upto 950 pounds of downforce which will require the front underwing to keep the front down.

In their usual fashion, Chevrolet will be giving out its first production for charity. The 2019 Chevrolet Corvette ZR1 will be sold for a good cause at the bidding block at the Barrett-Jackson Scottsdale auction. The company stated on Thursday that all the proceedings of the car will be going to the Stephen Siller Tunnel to Tow.ers Foundation. The foundation supports the wounded veterans as well as, helps them provide smart homes through the Building for Bravest programme.

Christy Gren
Christy Gren is an Industry Specialist Reporter at Industry Leaders Magazine she enjoys writing about Unicorns, Silicon Valley, Startups, Business Leaders and Innovators. Her articles provide an insight about the Power Players in the field of Technology, Auto, Manufacturing, and F&B.
« The New 2019 Subaru Ascent Gets Bigger and Better
Star Wars vehicles in our very own galaxy! »
Leave a Comment
Close