The brand new 2017 Mercedes AMG SLC 43 is a pleasurable boulevardier that you can be obsessive about. The new powerful convertible by the German automaker is the third-gen SLK hardtop with a mid-cycle refresh for 2017. A refresh that brings along fairly significant upgrades the appearance and the technology. The brand put up a dimly lit teaser for the upcoming convertible set to be ribboned off at the 2016 Paris Motor Show. The show will be open to the public from 1st to the 16th of October 2016.

A lot more than a boulevardier and also not a pure sports car, the 2017 Mercedes AMG SLC 43 is probably a direct competitor to Audi TT Roadster and the BMW Z4. A bit sporty when it needs to be and pleasant as a top-down cruiser, especially on lightly traveled back roads, this powerful convertible by the German automaker is a true grand tourer.

The reason for Mercedes to involve AMG is to inject the upcoming model with the DNA that will enable it to be faster and more dynamic to drive. The SL will carry on as a two-seater roadster. Nonetheless, it will drive on a brand new platform named MSA – Modularen Sportwagen Architektur. This move will help the SL leverage the monetary aspect ultimately boosting dexterity and fuel economy. Furthermore, it substitutes the current version’s folding metal hardtop with a conventional cloth soft top. This ultimately makes it lighter.

Moreover, power will hail from a turbocharged 3.0-liter straight six, the engine that generates 365 horsepower in the entry-level SL 300.

The convertible’s electro-hydraulic vario-roof enhances greater year-round utility. Whether it’s an open-top driving pleasure ride with the sunshine or a comfy environment in poor weather, this car has a solution for all. Furthermore, when shifting from one to the other, the roof can stow to a speed of almost 40 km/h.whoo

Nonetheless, the best characteristic for maximum drop top utility though, is the air scarf. The air scarf is a shoulder level heating system for the driver and passenger. Furthermore, an innovative highlight is the accessible automatic trunk separator. If it’s in the upper position for improved trunk capacity, it mechanically comes down when the roof is opened. Additionally, if there’s not sufficient space for this because the trunk is full, the roof will not open. Surprisingly, the AMG 43 sports car comes under a premium-pricing package and starts at a whopping $70,900. 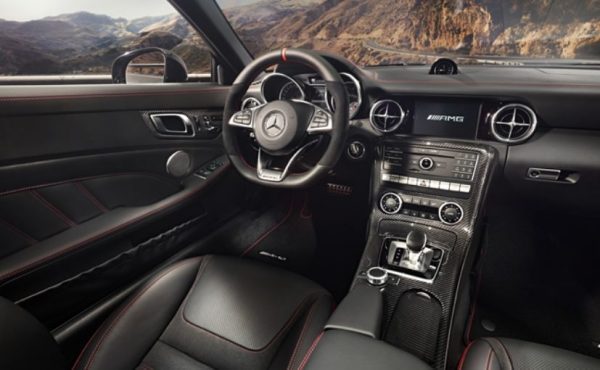 The convertible’s cabin is a calm, comfy and duly chic environment for a pair. As part of the mid-cycle update, the interiors boast dark aluminum trim bits with a carbon fiber look. The instrument cluster has a refurbish. The pair of tubular instrument surrounds black dials with red needles. A multifunctional 4.5-inch TFT screen display looks just perfect between the two dials. Furthermore, the centre display has been leveraged to seven inches.

Design tweaks and numerous AMG additions give the 2017 Mercedes AMG SLC 43 a belligerent character. This further combines with Mercedes’ copious safety attributes and ultimately a full measure of luxury.