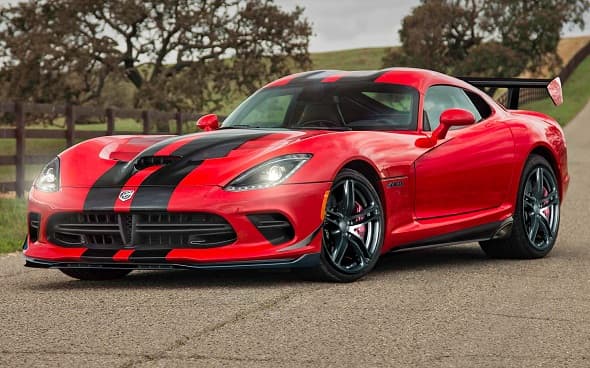 Viper ACR is the ultimate street-legal version of the sports car, and one of the fastest car ever made in the history.

Dodge president and CEO, Tim Kuniskis rolled out the new 2016’s Dodge Viper ACR’s sports car during an event and tour of Fiat Chrysler Automobiles’ Conner Avenue Assembly Plant that hand-builds the powerful sports car. It is one of the fastest new American club sports viper versions of the sports car, and one of the biggest achievement of Viper in its 24 years of the history.

Tim Kuniskis and STR said that the Viper is the ultimate street-legal version of the sports car, and ACR is the fastest car they’ve ever made in company history.

The 2016’s Viper ACR’s sports car is configured with new improved aero dynamics and lightweight materials. The materials include thin carbon fiber and aluminum body. The car’s speed comes naturally as we can find an all-aluminum coated on its sporty look. The ACR’s sports car is assembled with 8.4 L V-10 overhead- Value engine, rated at 645 horsepower and 600 lb.-ft of torque.

The top speed of the new Viper ACR is 177 mph that is technically less than the Dodge SRT Viper at 204 mph. But, Dodge officially commented that the new ACR’s extreme aero package will come with 2000 pounds of downforce and the highest downforce to date that when combines with more powerful brakes, it will allow the car to lap on the tracks faster than the Viper’s earlier ACRs.

It weighs one ton of downforce, i.e. for a car it weights around 3,400 pounds. The new Dodge Viper ACR’s interior has been improved than its previous ACRs’ versions, and have a bare bone look. Its feature also includes Alcantara suede around the steering wheels, ACR badging, and Alcantara insert throughout the cabin.

The idea to re-launch the new version of Viper’s sport car was, Kuniskis that has taken several months to re-generate its renewed interest in the Viper. The production unit is planning to sell of this new version sports car in the third quarter of the year. Dodge Viper ACR, will be the fastest viper on the track and will go on the sale by this fall.

The automaker dropped the entry level price of the Viper by US$15000 last year, and has launched a new website, which will allow Viper customers to custom order their own new Viper version spots car. It has also opened the manufacturing auto mobile plant for a media tour to general public for the first time after a number of years.

Anna Domanska
Anna Domanska is an Industry Leaders Magazine author possessing wide-range of knowledge for Business News. She is an avid reader and writer of Business and CEO Magazines and a rigorous follower of Business Leaders.
« Goldman Sachs to settle Forex lawsuit for $130 million
Volvo Cars Corp. to Build 1st Automotive Plant in South Carolina »
Leave a Comment
Close