2014: a year for synthetic biology, dark matter, and more! 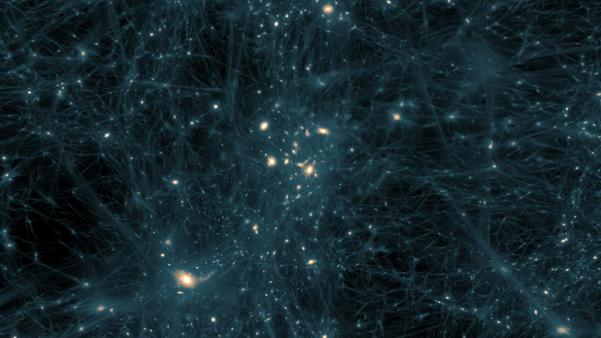 This computer simulation visualizes the filaments of dark matter thought to underpin the Universe’s structure of galaxies and galaxy clusters.

Expectations concerning energy and science continue to build up as new discoveries and enterprises are unveiled during the first weeks of 2014. This year promises interesting energy and health solutions, which go from upgrades in wind powered renewable electricity to further understanding of what black matter is.

While scientists are still looking for new alternatives to traditional fossil fuels, a great number of ambitious projects in wind powered renewable electricity have been undertaken. For instance, Deepwater Wind (near Block Island, Rhode Island) and Cape Wind (in Massachusetts’ Nantucked Sound) are now competing to become the first offshore wind farm in the United States.

Along with power from waves, volcanoes, biomass and the sun, wind power is conceived as a significant alternative energy source in 2014. For instance, Cape Wind is expected to generate 1,500 gigawatt hours of wind powered renewable electricity every year, while Deepwater Wind will provide 1.3 million megawatt hours per year—which is about 15 percent of all electricity used in the state.

Marcus Fairs, editor of dessen.com, an influential online design magazine, predicted that during 2014 the most relevant emerging technologies will be in the field of synthetic biology. “It involves the creation of new types of artificial life forms that perform useful functions. At the smallest scale it could mean man-made microbes that live inside your body and detect illness; at the largest scale it could mean synthetic creatures that are released into the wild to clean up pollution or attack parasitic species,” he wrote.

Through the evolution of synthetic biology, extraordinary potential genetic codes may be unlocked, leading to the invention of powerful new living devices and the reinvention of existing biological processes. From cleaning up pollution, delivering vaccines, diagnosing diseases or sustainably producing scarce chemicals, this branch of science has become a promising tool for humanity.

In the search of the dark side

In contrast to synthetic biology, Tim Meyer, Head of Strategic Planning and Communications at TRIUMF, Canada’s national laboratory for particle and nuclear physics, puts his hopes in physics, specifically in the search for dark matter.

For the last few decades, scientists have know that visible matter –everything that we can see—makes up just 4 percent of the universe, while dark energy is conceived to make up about 73 percent. Dark matter is thought to make up the remaining 23 percent, and researchers explain that finding it will solidify humanity’s understanding of how the universe formed and shed light on its definitive fate.

“Dark matter is being searched for in everyone’s sock drawer as well as deep underground and with satellites. The underground experiments are likely to find something before the Large Hadron Collider turns back on to try ‘making’ it. We could see a conclusive discovery of weakly interacting, massive dark matter particles this year. That will blow your mind,” he said.